Or maybe they're going to Oregon because it's what Californians do 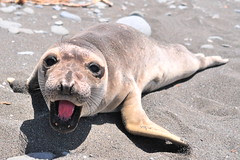 Curious Sea Lion
Originally uploaded by Dave Schumaker.
I like to write Geographile posts that, if not brief, are either heartfelt and eloquent, or well-researched. Brief ones can be neither. However, this one also is neither. It is ranty and annoyed.

I'm recovering from the flu, and what I want to do, really, is to go play flash games and have a beer, or maybe have another Sudafed (the real stuff) and go to bed.

But instead, there was this earthquake today, which was exciting. And besides all the Jesus Is Coming and similar posts on twitter, the bad science started coming out.

See, last October, the ubiquitous, numerous, smelly, but cute California sea lions at Pier 39 in San Francisco started leaving the area. Then more left, and soon, people were wondering what had become of our sea lions, which aren't historically massed there, but have been as of the past few years.

Within the past couple of weeks, they were found, up with the Steller sea lions and other marine mammals along the Oregon Coast, and at Sea Lion Caves, perhaps due to shifting temperatures, those perhaps due to our currently strengthening El Niño pattern, because that's where their food went. (Yes, there's still a lot of "perhaps," but this was a puzzle until recently, and is coming together.)
.
And of course, because it seemed "suddenly," folks on Twitter are saying, "They knew the quake was coming." (At least one of these twitterers might even be from the bay area or elsewhere in earthquake country, or perhaps sea lion country. Or not.)

But this is not sudden, and there are explanations:

1) The sea lions started leaving in October.
2) Recent, pre-today research suggests that their being found in SW Oregon reflects temperature changes in the ocean off the coasts of California and Oregon, and the food the sea lions prefer is following the temperatures they like. The sea lions are following fish. (Some aren't. Some seem to be hanging out at the Farralons for squid. But many went to the waters off the coast of SW Oregon for fish.) 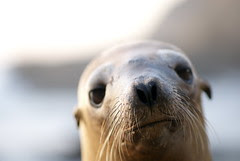 According to Google maps, from Florence, Oregon, where Sea Lion Caves is, to Ferndale, California, the nearest town to today's quake epicenter, is 285 miles. From San Francisco to Ferndale is 262 miles, by straighter roads. So let's call the quake area halfway in between there. (Yes, I know the sea lions don't drive. But I'm ballparking things here.)

Why would marine mammals leave in October (and later, but still) to swim through where a quake is coming, and end up just as far on the other side ... because they knew a quake was coming? 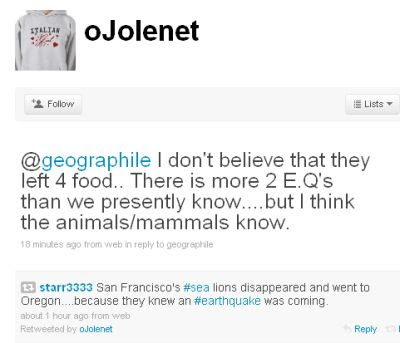 It's not like I expect sea lions to have logic, but c'mon: Why? Why not go, oh, to Santa Barbara, the other direction? Why go to all that effort to end up the same distance from the quake anyhow?

And why leave San Francisco when today's quake was barely felt at all there? It wouldn't gain them any advantage.

Folks are saying, "Animals do strange things." Sure. Sometimes they do. But if you're going to make a wacky connection, at least come up with a good enough story to support it.

Dear people who were kind enough to discuss this with me on twitter today:
I don't mean to be totally dissing you. I am open-minded about, say, that there are aspects of quakes that animals can sense but we don't, and there are noises they can hear that we can't. But look: The idea that sea lions would leave the San Francisco area for Oregon, passing through an area where a quake is going to happen weeks in the future, to end up the same distance on the other side, when there's no good reason for sea lions to care, makes no sense on any level, not even if I were to open my mind so far my brain falls right out.
Posted by Mary at 11:27 PM 1 comment: 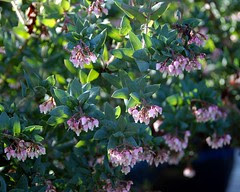 Arctostaphylos pajaroensis 'Warren Roberts' - Warren Roberts Pajaro Manzanita
Originally uploaded by pete@eastbaywilds.com.
One of my goals this year is to learn to discern every single manzanita species within a couple of hours of my house. They're different, they fit different niches. They're mostly sclerophylls, and healthiest with wildfire every couple of decades. They control the chemistry underneath them for their own best health. They have the most beautiful wood, and the most fairy-like little flowers, and I am in love with them. They are one of the plants that screams "California" to me, the California I grew up with and love.
Posted by Mary at 3:11 PM No comments: