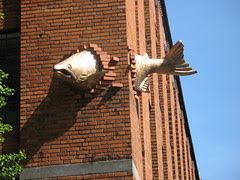 My only phobia besides heights is unreinforced masonry, because of the whole "falls on head in earthquake" issue. But I am quite sure this is reinforced.

Clearly, it was just a very strong fish.
Posted by Mary at 3:37 PM No comments:

getting by in Bolivia ... the hard way

Coroico Bolivia
Originally uploaded by Chris-Ecuador.
We're not going into the heights thing this time.

But this got to me:

Juana Combata used to cross the valley almost every day with her family-- hanging on to the cable that links her community to the rest of the world. But one day in June of last year, things changed.

A piece of steel holding the plank holding Juana, her husband, and her 3-year-old son, broke, and they plummeted nearly 100 feet to the shore of the river, hitting the rocks below.

Juana and her husband Edwin survived with some injuries.

"Nowadays I don't cross the cable that much, I'm afraid since I fell down. If I have to do it I go alone, I fell with my son, my husband... so now I just grab my baby and go alone with him."

The rest of the interview, with the (non-embeddable, dangit) video is at National Geographic.

They have to cross that cable to survive. They put their kids on it, balance carefully, and slide. I guess I'd do it if I had to, but I can't imagine doing it after a fall like that.

The area is rich in coca-based agriculture. The Combatas grow mandarins, and send them off to LaPaz on a journey that begins in a basket hanging from that river cable.

Now I wonder whether the Combatas are growing mandarins in a way that hurts the forest.

Although Bolivia has a decent and growing National Parks (NP) system, threats in the form of habitat loss and general degradation due to human activities persist outside protected regions. This ecoregion is threatened because it is easier for local agrarianists to burn this habitat than true montane forest for growing cash crops. In some cases crops and logging have increased due to more intensified road-building efforts. Extensive forest clearance in the Bolivian Andean foothills to cultivate crops has endangered over 70 species of birds, especially in the Departments of La Paz and Cochabamb. Additionally, certain game species from this ecoregion are threatened by over-harvest for protein and/or the wild bird trade.

Of course, this sort of degradation is common worldwide, in both developing and well-developed nations.
In many cases, that's what "development" is.

But it's not sustainable.

The Combatas and their neighbors have to eat.

Helping them do so without ruining their local ecosystem is part of the overall, global sustainability picture.
Posted by Mary at 1:28 AM No comments:

From Bad Astronomy (one of my favorite blogs)
comes a time-lapse series of Saraychev Peak erupting
and wow is this cool. You've seen the photo series, I suppose. This one is run back and forth, looped, run in slow motion, run in slow motion with the pyroclastic flows﻿ highlighted .... it's a two-and-a-half-minute video, but I stared at it all the
way through, then ran back over the most compelling bits, then ran it all way through again.

It's worth spending some time with. I just wish the series were longer, that we could watch the
ash bloom further out of the side of the cloud the eruption created as it pushed air into a colder layer.

I guess asking the ISS to stop for a few minutes so the astronauts could take more pictures would have been asking too much.

(Note: It's got some interesting music attached. I'm sure the video won't take offense if you watch it without sound on.)
Posted by Mary at 11:10 AM No comments: 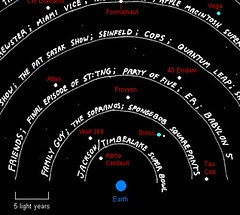 electromagnetic_leak
Originally uploaded by marymactavish.
The Abstruse Goose comic illustrates where the electromagnetic waves we're flung into space are now.

Sadly, folks on the furthest planets haven't yet seen Gilligan's Island. (I assume this means that Thermians come from somewhere near Formalhaut.)

(The big version's back at Abstruse Goose. It'll take you out past Aldeberan.)

(edited to add: This post led to a huge discussion in my house about how long the Thermians would have been able to see our TV shows, how long it took to build the ship, and whether they might have sent probes nearer to us to collect data, then had them return via hyperspace, faster than light, meaning that they would have more information from our TV shows than we realize.)
Posted by Mary at 8:46 AM No comments:

That is a huge, big deal.

It's not like the law was always or evenly enforced in India, but it allowed a lot of leeway for abusive police action. And though it's not like the police in India are never corrupt or abusive even within the law, this is still a huge first step.

India managed to shake off the demands of its religious groups to get rid of section 377. I'm glad there are countries that can still pull that off.
Posted by Mary at 10:39 PM 1 comment:

Gravity and I need to have a little talk

I am absolutely sure, indeed, that I have mentioned that I am afraid of heights.

Visit msnbc.com for Breaking News, World News, and News about the Economy

I need to get over it.

I was able to go to the top of the Empire State Building easily, I think because I don't feel like I'm going to fall over, all railings are above my center of gravity. Though "the ledge" at Sears Tower is completely enclosed, the visual sensation of potential gravity-assisted exit from the structure made my toes curl up, quite literally, while I was watching the video.

This is indeed geography. Lots of things are.

More than I knew about Washington DC 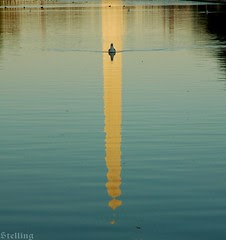 Washington Sightseeing
Originally uploaded by ®oberto's.
US News and World Report has a little quizlet on Washington DC. The easy questions were easy for me, the hard ones really made me think, and I missed a couple. There was no in-between.
Posted by Mary at 11:34 AM No comments:

NASA's image of the day for today 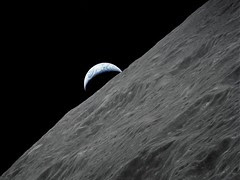 "What could possibly go wrong?" 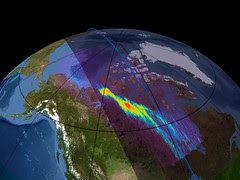 Earth Aurora (Auroral X-ray emission observed from Earth's north polar region.)
Originally uploaded by Smithsonian Institution.
This is just ... nuts. It *must* somehow be better to just learn ways to protect satellites and humans (once we're in space more) from the radiation.

The [Van Allen] belts are a hazard for artificial satellites and moderately dangerous for human beings, difficult and expensive to shield against.

There is a proposal by the late Robert L. Forward called HiVolt which may be a way to drain at least the inner belt to 1% of its natural level within a year. The proposal involves deploying highly electrically charged tethers in orbit. The idea is that the electrons would be deflected by the large electrostatic fields and intersect the atmosphere and harmlessly dissipate.

Besides that I personally can't imagine the risk we'd be taking by making such a huge change to the makeup of space just outside our atmosphere (can some of you more astronomy/science-minded folks chime in?), I wouldn't want to lose the auroras!
Posted by Mary at 11:25 AM No comments: