This is a pretty little school presentation. 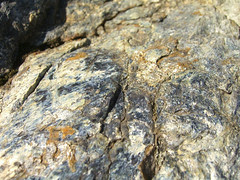 Serpentine boulder, Oakland, California
Originally uploaded by marymactavish.
Andrew Alden of geology.about.com has been redoing his gallery of rocks, starting with igneous, but moving on to the other types eventually. You can visit his newly remodeled igneous section here, clicking down one layer will lead you to his current metamorphic and sedimentary pages, as well -- and eventually, to the redone versions.

I chose serpentine for this photo, because
1) it's in Oakland, and Andrew also does an Oakland Geology blog, which is fascinating if you're someone like me and
2) it's my all-time favorite rock. I've got a long and fancy serpentine post sitting there in notepad waiting patiently for me to finish it for this blog.
Posted by Mary at 10:14 PM No comments:

holy writing from my religion 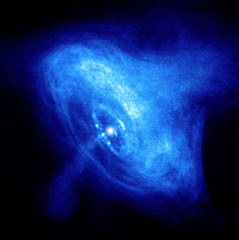 The remnant of a supernova located 6000 light years from Earth in the constellation Taurus.
Originally uploaded by Smithsonian Institution.
At least, it's spiritual for me:

Poets say science takes away from the beauty of the stars -- mere globs of gas atoms.
I too can see the stars on a desert night, and feel them. But do I see less or more?
The vastness of the heavens stretches my imagination --
stuck on this carousel my little eye can catch one million year old light.
A vast pattern -- of which I am a part...
What is the pattern, or the meaning, or the why?
It does not do harm to the mystery to know a little about it.
For far more marvelous is the truth than any artists of the past imagined it.
Why do the poets of the present not speak of it?
What men are poets who can speak of Jupiter if he were a man, but if he is an immense spinning sphere of methane and ammonia
must be silent?

This was a footnote in one of physicist Richard Feynman's books, The Feynman Lectures on Physics. It's become one of my favorite poems ever.

(And I'm being a little silly, I don't really have science/nature/wonder as a religion, so much as that it's just a major source for things spiritual in my heart.)
Posted by Mary at 2:34 PM No comments:

Trying to come up with something important to say and all that occurs to me is "it's neat to hear the three languages work together like that."

To live is to learn, I can't imagine giving up curiosity 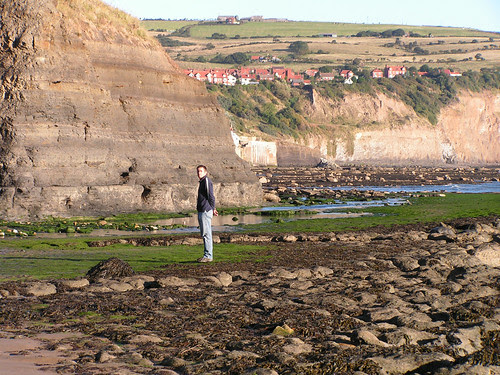 Swiped directly from Living Geography;
"... teachers are, first and foremost, public intellectuals. They really do need to 'know' something worthwhile, relevant and enjoyable to teach. That is why teaching is a graduate profession. Teachers need to have learned something, and in a dynamic subject like geography they need to keep learning."
Posted by Mary at 1:48 AM No comments: That is why Republicans put forward plans to create jobs by lowering income tax rates for working families...cutting taxes for small businesses ...strengthening incentives for businesses to invest in new equipment and hire new workers...and stabilizing home values by creating a new tax credit for home-buyers. These plans would cost less and create more jobs.

But Democratic leaders in Congress rejected this approach. Instead of trusting us to make wise decisions with our own money, they passed the largest government spending bill in history - with a price tag of more than $1 trillion with interest. While some of the projects in the bill make sense, their legislation is larded with wasteful spending. It includes $300 million to buy new cars for the government, $8 billion for high-speed rail projects, such as a 'magnetic levitation' line from Las Vegas to Disneyland, and $140 million for something called 'volcano monitoring.' Instead of monitoring volcanoes, what Congress should be monitoring is the eruption of spending in Washington, DC.

My guess is that cost him the vote, should he decide to seek the Republican presidential nomination for the 2012 elections, of much of southern Alaska, Washington, Oregon, and Northern California, and perhaps Hawaii too.

The towns southeast of Tacoma and Seattle, in Washington, are immediately downflow of Mount Ranier, and would receive the brunt of its mud, at the very least. Many towns in that area lie on existing mudflow. Monitoring the Cascades and other American volcanos protects western American cities as much as monitoring Atlantic weather protects southern and eastern cities.

Science really is important, and it worries me when it's brushed off as "something called 'volcano monitoring'," when it's treated like an elitist hobby. Americans can do it -- but not without good hard science.

(edited to add: Geologist Maria Brumm added the fiscal element: "I wish I'd thought of that.")
Posted by Mary at 8:29 PM 1 comment:

I've read so much about Lilly, and whether she's just parroting information, or really "knows" this stuff. What is knowing, when it comes to labels? Aren't we parroting, too? Does it matter, if she's learning to be fascinated by maps?
Posted by Mary at 12:02 AM No comments: 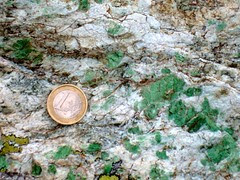 gabbro a smaragdite
Originally uploaded by marizerb.
As usual. And they are here.
Posted by Mary at 10:28 PM No comments: 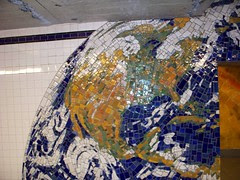 nycmusnathistsubway0453
Originally uploaded by marymactavish.
This is a really sweet article, but makes me a little sad, because I "invented" the word geographile, and this usage is a good 15 years before I came up with it:

After his recent presentation to the Utah Geographical Society, he gave Brad a copy of "A Geolinguistic Handbook," engraved on the cover with "Brad R. Dennis, Geographile."

They ask at the end:

(They also answer those questions.)
Posted by Mary at 7:01 PM No comments: 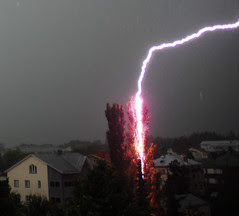 A close one ... 370.000+ views and 2.000+ favorites
Originally uploaded by aixcracker.
Just wanted to show you a cool lightning picture. Please click through to the photo page for the photographer's explanation, cool notes on the image, and the fate of the trees.
Posted by Mary at 4:38 PM No comments:

Sparks 2008 APS Poster - "Regional predictions of potato late blight risk in a GIS incorporating disease resistance profiles, climate change, and risk neighborhoods"
Originally uploaded by earlycj5.
A friend of a friend wants to do some GIS work involving health stats -- cause of death -- in a medium-sized town, with ability to map cause of death, and zipcode, and probably overlay them. I'm not sure of the details, and not very GIS-savvy. He's wondering what software's best. I know of ArcGIS. Any other recommendations? Feel free to ask questions, I'll answer if I can, and provide the asker links to this discussion.

(The poster is about potato blight. This is not related to cause of death.)
Posted by Mary at 9:17 AM 6 comments:

The Cinematic Geography of the Los Angeles area

I don't think Fox Plaza really blew up. There are a lot of reasons I wouldn't choose to live in Los Angeles. The first time I ever drove there, I had to find a friend's house in Hollywood at 1 am, I'd been driving only a few months, and her directions failed because 101 through Hollywood was closed for a movie filming. I had to make my way through city streets, without a map, without google maps on my Treo, hoping for the best, not knowing where I could stop safely. Fortunately, my habit of reading maps for fun gave me a basic understanding of LA geography and where I was headed, and my sense of direction and knowledge of main streets took me right to her apartment -- only two hours late.

Why seasons change - the basics