they became casualties of their own privilege 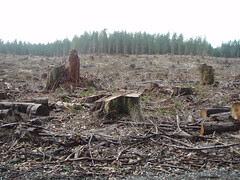 Clearcut
Originally uploaded by thekirbster.
This is happening in so many ways, right now, as it's happened throughout history. But with seven billion people, healing is harder than it once was.

You would think the rich might care, if not from empathy, then from reading history. Ultimately gross inequality can be fatal to civilization. In his book Collapse: How Societies Choose to Fail or Succeed, the Pulitzer Prize-winning anthropologist Jared Diamond writes about how governing elites throughout history isolate and delude themselves until it is too late. He reminds us that the change people inflict on their environment is one of the main factors in the decline of earlier societies. For example: the Mayan natives on the Yucatan peninsula who suffered as their forest disappeared, their soil eroded, and their water supply deteriorated. Chronic warfare further exhausted dwindling resources. Although Mayan kings could see their forests vanishing and their hills eroding, they were able to insulate themselves from the rest of society. By extracting wealth from commoners, they could remain well-fed while everyone else was slowly starving. Realizing too late that they could not reverse their deteriorating environment, they became casualties of their own privilege. Any society contains a built-in blueprint for failure, Diamond warns, if elites insulate themselves from the consequences of their decisions, separated from the common life of the country.