Burakumin children fleeing an angry mob (and modern context, too) 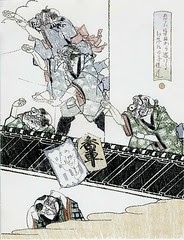 Contribution to Foodist Colony 2
Originally uploaded by palindroam.
According to an AP story, Google included some old David Rumsey-archived maps of Tokyo in Google Earth's recent historical maps layer, including those that showed historic Burakumin.

The Burakumin were (are, in some minds) a very low caste of people who traditionally worked in fields that were related to death, such as grave-digging and tanning leather.

But that was centuries ago, right? According to modern leaders of communities of Burakumin descendants, having their historic neighborhoods visible in Google Earth is discrimination, or at least, facilitates it:

[Google] is now facing inquiries from the Justice Ministry and angry accusations of prejudice because its maps detailed the locations of former low-caste communities."
[...]
Castes have long since been abolished, and the old buraku villages have largely faded away or been swallowed by Japan's sprawling metropolises. Today, rights groups say the descendants of burakumin make up about 3 million of the country's 127 million people.

But they still face prejudice, based almost entirely on where they live or their ancestors lived. Moving is little help, because employers or parents of potential spouses can hire agencies to check for buraku ancestry through Japan's elaborate family records, which can span back over a hundred years.

An employee at a large, well-known Japanese company, who works in personnel and has direct knowledge of its hiring practices, said the company actively screens out burakumin job seekers.

"If we suspect that an applicant is a burakumin, we always do a background check to find out," she said....

Lists of "dirty" addresses circulate on Internet bulletin boards. Some surveys have shown that such neighborhoods have lower property values than surrounding areas, and residents have been the target of racial taunts and graffiti. But the modern locations of the old villages are largely unknown to the general public, and many burakumin prefer it that way.

Google Earth's maps pinpointed several such areas. One village in Tokyo was clearly labeled "eta," a now strongly derogatory word for burakumin that literally means "filthy mass." A single click showed the streets and buildings that are currently in the same area.

Google posted the maps as one of many "layers" available via its mapping software, each of which can be easily matched up with modern satellite imagery. The company provided no explanation or historical context, as is common practice in Japan. Its basic stance is that its actions are acceptable because they are legal, one that has angered burakumin leaders.

Much more detail is available at the link.

Google has, with the help of David Rumsey, removed information about these neighborhoods from the current updates for Google Earth.

It was Rumsey who worked with Google to post the maps in its software, and who was responsible for removing the
references to the buraku villages. He said he preferred to leave them untouched as historical documents, but decided to change them after the search company told him of the complaints from Tokyo.

"We tend to think of maps as factual, like a satellite picture, but maps are never neutral, they always have a certain point of view," he said.

Rumsey said he'd be willing to restore the maps to their original state in Google Earth. Matsuoka, the lawmaker, said he is open to a discussion of the issue.

I find myself wishing I'd re-installed Google Earth after I re-installed Windows a few weeks ago. I figured I would as soon as I wanted to use it, but now I want to look without updating, and see the older maps. Maybe a poke around David Rumsey's site would do the trick.

Still: I want to see it as a layer, in context, but perhaps, as the Japanese hope, with historical context given as well. Every modern nation has some history that needs a better light shined its way, Japan included.
Posted by Mary at 1:30 PM No comments: There are some photos in there with names and some description, but not enough information. The Smithsonian is requesting the help of flickr users in gathering more information about the scientists in the pictures.
Posted by Mary at 1:00 AM No comments:

I like reading maps and atlases written in different languages, both for the varying names of countries and features, as well as different words for basic map terminology. 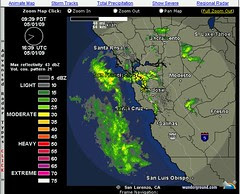 irrigation system
Originally uploaded by marymactavish.
In the middle of the summer, this area can get a tenth of an inch of rain a month. Mostly, it pours (if we're lucky) mid-winter, and is dry all summer. The occasional thundershower might punctuate the endless browning of the grass, the cracking of the clay soils. When clouds come in like they did last night, I just assume it's the marine layer, fog. But I heard raindrops on the old stovepipe in the roof this morning, looked out, and YAY! Rain! The crops are saved!

(Also: I always say "rain, the crops are saved" because of the old shampoo commercial from the seventies that no one else remembers.)

Yay, Mediterranean climate. Yay, occasional interrupting shower, so I don't have to use the brand new irrigation system today.
Posted by Mary at 9:57 AM No comments:

Phoebe and Sophie are geographiles

And they want you to know why they think geography is important:

I really love student videos. :D
Posted by Mary at 8:35 PM No comments:

This almost makes me want an iPhone

I really love my Palm Treo, but the interface of the iPhone allows games . . . I mean, um, learning tools like this, in ways Palm's interface can't.

I have no idea how well this app works, I've never tried it. I have no connection with the company that makes it. I just want to play with it.