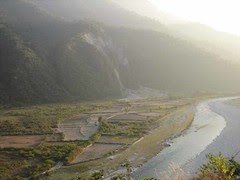 India small069
Originally uploaded by Ruth M2007.
Until last week, the Kosi, a tributary of the Ganges, curved westwards out of Nepal in a C-shape. But in the torrential rains that have hit the region, the river burst its banks and diverted southwards through the state of Bihar, into a channel it had followed 200 years previously.
Satellite pictures

Where the rivers flow, and where harbors lie, is a major driver in human geography.

This is a very, very big deal.

(Only somewhat orthogonally, I'm reminded of John McPhee's description of the Atchafalaya's attempt to reclaim the Mississippi's water, in Control of Nature (how lucky we are that the New Yorker has archived that story for us), and how now, the US Army Corps of Engineers can't let the patterns of history, the switching back and forth of the main channel between the two rivers, continue, or it will leave New Orleans without its water highway.)

I don't think entropy's going to let us get in its way.
Posted by Mary at 1:47 PM No comments: