Yellow-billed Magpie
Originally uploaded by amkhosla.
"It is known that to the right of the Indies there exists an island called California very near the terrestrial paradise; and peopled by black women among whom there was not a single man since they lived in the way of the Amazons.

They had beautiful robust bodies, spirited courage and great strength. Their island was the most impregnable in the world with its cliffs and headlands and rocky coasts. Their weapons were all of gold . . . because in all the island there was no metal except gold.

And there ruled over that island of California a queen of majestic proportions, more beautiful than all others, and in the very vigor of her womanhood. She was not petite, nor blond, nor golden-haired. She was large, and black as the ace of clubs. But the prejudice of color did not then exist even among the most brazen-faced or the most copper-headed. For, as you shall learn, she was reputed the most beautiful of women; and it was she, O Californias! who accomplished great deeds, she was valiant and courageous and ardent with a brave heart, and had ambitions to execute nobler actions than had been performed by any other ruler — Queen Califia." -- from
Las sergas de Esplandián by Garci Rodríguez de Montalvo 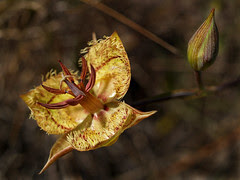 Yesterday, StrangeMaps showed us a 15th Century map from China that shows what could even be Australia and New Zealand, as well as the classic Island of California off the west coast of North America. This map was created long before Columbus, Magellan, or Drake sailed the seas. Look how similar the continental boundaries are to today's maps, how well the coasts match what we now know. 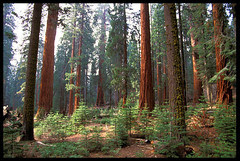 Though California isn't an island (it's probable that the opening to the Gulf of California and perhaps the Columbia River made it seem so), Elna Bakker used the idea for her book, Island Called California, about California's unique "island ecology." Because we have an ocean to our west, a high mountain ranges to the north and east (with those on the east backed by desert), and desert to the south and southwest, much of California's land is ecologically like an island, with endemic organisms of all sorts. Our magpies have yellow bills, our sequoias are unique, we have lilies and salamanders like no others. To be honest, as much as part of me supports the division of California into two states, a bigger part of me wants not to break that poetic island, to distribute yellow-billed magpies between two states, or to either divide or simply give up the sequoias as "my own." 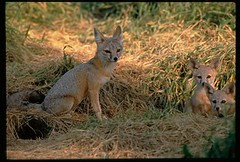 As California changes with the climate, some of the animals -- amphibians and more delicate herbaceous plants, especially -- will have no place to go. The same barriers that allowed them to develop in unique ways will largely prevent them from adapting by gradually shifting their ranges elsewhere. Around the world, humans have made barriers of their own, as well. Plants and animals can't adapt by moving through farm belts, urban areas, or across new desertified regions, either. We are banishing our wildlife to islands to make do with what they have.
Posted by Mary at 3:15 PM No comments: