That's a horrible and fascinating phrase.

I have no idea when this short National Geographic web exclusive on Hulu.com will last, but it's here now:

I'm a big fan of molluscs, I find them endlessly fascinating. (I also find them occasionally tasty. I'm about 99% vegetarian, but small bivalves rock my culinary world.)

I didn't really know much about giant clams. I guess I assumed that they lived in the deep sea (they don't), and that they were a lot like large versions of normal clam species. But they have nifty skin not unlike a squid's (less shiftingly chromatophoric*), and I had no idea about their relationship with algae!

Also, let it be said that the diver at the end of this clip is a doofus. Don't go messing with sea animals or coral reefs, Doofus Diver.

*It's amazing what blogger labels as incorrectly spelled. What, that's not a word?
Posted by Mary at 7:38 AM 2 comments:

I am surrounded by bad influences 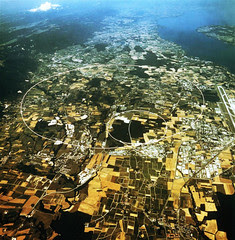 Andy: I wonder why it's specifically on the French-Swiss border.
Casey: Probably more to do with geography than politics
Casey: CERN is a pragmatic bunch.
Andy: I mean, won't that sloow the particles down? They have to whip out their little particle passports and go through particle customs twice per loop.
Casey: Sorry, didn't see the joke coming, you must have sent it faster than the cluons could reach me.