To drink forever alongside Odin

I can't always figure out where Geography ends. Does it include our atmosphere? I think so. Magnetosphere? Why not? 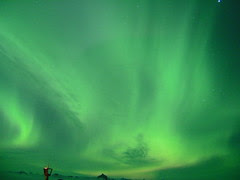 Of course, astronomy fascinates me, too.

At any rate, the auroras are clearly in the zone where astronomy and geography overlap.

Astrospace Now has a great podcast discussing folklore about the auroras.

I've only seen an aurora once, and it was an Aurora Australis. I was at only 32.7 degrees south latitude, in South Australia -- very far north to see them. They oscillated and shimmered like a bright green gossamer curtain. I hope to see the Aurora Borealis this coming spring, when I'll be in Alaska.

(Photo in the creative commons by Chantal Steyn.)
Posted by Mary at 12:47 PM No comments: 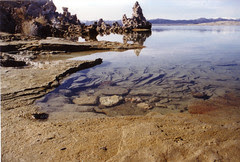 Mono lakeshore
Originally uploaded by marymactavish.
Felisa Wolfe-Simon, a geobiologist, thinks Mono Lake may host "...alien life forms, or 'weird life'." She is investigating whether, in the mud or water, there live microbes "whose biological make-up is so fundamentally different from that of any known life on Earth that it may provide proof of a shadow biosphere."

I love the Mono Lake basin because it's stunning and fascinating.

The Sierra Nevada rise along its western side.

Panum Crater, to the south, is a small volcanic cone a few hundred years old. When you hike up into it, first you walk over crunchy pumice, then over pieces of obsidian that tinkle underfoot like broken glass, making the thought of a stumble slightly nerve-wracking.

I once saw a Long-tailed Jaeger in a freshwater pond just north of Mono Lake. It's a pelagic bird that was lost ... or interested. Many species of bird feed on the brine flies at the edge of the lake. Eighty-five percent of California Gulls (the species, not the geographically-placed) breed here.

But now, the possibility of parallel evolution? arsenic-based life? Mono Lake just gets cooler.
Posted by Mary at 1:05 AM 1 comment: