Layers
Originally uploaded by battyden
Watching Battyden's short time-lapse of shifting cloud layers made me vaguely sad all of a sudden. A decade ago, I could watch this sort of movement over a period of time and roughly forecast the weather. One cool-not-cold April day in the eastern Sierra, I was sitting in the hot water of Grover Hot Springs, watching the clouds above me, and told my companion that based on what I was seeing, the temperature would drop 10-20 degrees over the next two hours, and we might get some precipitation. He laughed. We sat awhile longer, then each entered our respective changing rooms to get dressed to go eat dinner. A bit later, as I was tying my boots, the door swung open. Someone walked in wrapped in a coat, scarf, hat . . . and about a quarter inch of snow. While I'd been showering, drying off, and dressing, in maybe 20 minutes time, the clouds had thickened up, the temperature plunged, and the snows came down.

(A propos of completely nothing, at this point, I'd moved from Berkeley to Sacramento a few years previously, and yet, the snow-covered woman who walked in was an acquaintance of mine from Berkeley whom I hadn't seen in at least four years.)

I had a brilliant Geography 1 teacher, whom I keep meaning to write about, who got us excited about stuff like knowing how to forecast weather from observations, because he did, and now I've mostly forgotten the skill for lack of practice. I feel like I should go out into the country for a month and just pay attention. The bay area is actually painfully simple: It will be foggy and clear up, or it won't. If it does, the temperatures will rise; if it doesn't, they won't. It won't rain (much at all, sometimes some spitting) in the summer. In the winter, if it's cloudy it will probably rain, and probably quite a lot. If it's not, it won't. It's hard to see enough incoming weather to really forecast it, and it's often hard to see past the low fog to anything going on in the upper sky. Of course, I could always visit Wunderground, but that misses the point.

I need to get my body out there paying attention again.
Posted by Mary at 10:50 AM 1 comment: 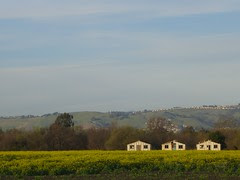 Coyote Hills
Originally uploaded by marymactavish.
This photo reminded me that I need to start doing posts about places that spark memories and bring about an emotional response. I took this photo on my way back from Coyote Hills, in the East Bay Regional Parks system, last February. Coyote Hills is just north of the Dumbarton Bridge toll plaza, in Fremont. It's now a fairly well-developed wetlands park, with habitat for raptors, grassland mammals, deer, and everything that lives in marshes, including muskrats, fish, and birds such as bitterns. I saw a Chilean flamingo there, once, but I think it was an escaped exotic.

On this, the eastern side of the park, there has been huge fuss about development. How close can the houses come to the park? Just to the southeast of these houses, less than a quarter mile away across the road, is a big business park full of half-occupied buildings built just before the dotcom boom of the late nineties crashed. Not much farther away are condos and new subdivisions. Where will the wastewater go?

When I first visited Coyote Hills, Gerald Ford was in his waning days as president. It was hot that day (by bay area standards) and very windy, and there weren't big roads around here. There was no big highway 84, the Dumbarton Bridge was still a water-level toll bridge, and we rode our bikes from the very western side of Newark all the way up to around around the Coyote Hills, where there was almost nothing at all. It was hot and windy and I was out of shape and exhausted. It colored my experience of those hills so strongly that I resisted going back until about 1998, when I moved to the Fremont area, and re-discovered them.

I love them now, their bird life and the muskrats and the sunset view, and how the Coyote Hills are what remains of ancient mountain ranges, and are (along with the related Albany Hill) among the oldest hills in the bay area.

The houses on the hill in the far distance weren't there, when I first visited. Parts of the east bay hills are still getting paved over with streets, and houses are being sprinkled here and there, but mostly, the remaining hills are part of our green belt tradition, and I work to protect that, too.
Posted by Mary at 5:15 PM 2 comments: