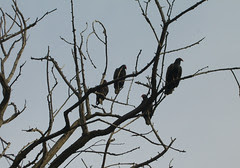 Yard vultures
Originally uploaded by marymactavish.
When I was a little girl, my family drove around a fair bit in northeastern California. The area wasn't nearly as populated then as it is now, with the growth of Redding and development of its suburbs, but the roads were lightly traveled. One day, while we were picnicking at Hat Creek along highway 89 north of Lassen Peak, my mother saw Turkey Vultures kettling overhead. Being my mom, she told one of my sisters to lie down in the middle of the road and see if the vulture would think my sister was roadkill, and land for a snack. Being one of my mom's kids, my sister protested but did it anyway.

Of course, the vulture never landed. What we didn't know then, but know now, is that the Turkey Vulture is one of the few birds with a keen sense of smell. They choose their carrion from the scents that waft up to them on warm air. It needs to be a few hours old, but can't really be rotting.

Researchers have put roadkill deer deep into bushes, not far from carefully cleaned and taxidermied deer that look dead, in a clearing, and the vultures have gone after the nice meaty stinky deer. There are stories of Black Vultures following Turkey Vultures to find better dinners.

North America's vultures – the common Turkey Vulture and Black Vulture, and the critically endangered California Condor – are very different animals from old world vultures, but share the same niche. They are more closely related to storks than they are to the old world vultures, and are not raptors, as they don't catch live prey with their feet. But all vultures and condors have mostly bald heads, and eat carrion. A bit more than a decade ago, the nascent Animal Planet had a show called “All Bird TV," and on it, host/ornithologist Ken Dial, a bald guy, illustrated the need for bald carrion eaters by putting a wig on and plunging his head into a huge pot of saucy spaghetti. It stuck all over the wig. Then he removed the wig and stuck his bald head in the pot. What spaghetti managed to stick at all was easily shaken and wiped off.

The California Condor is still at risk from myriad human causes. They bump their huge wings on high voltage lines, they consume lead bullets in carrion, they're occasionally shot at. They don't seem to mix well with modern human society, and there are only about 200 California Condors left.

Old world vultures are also threatened by loss of habitat and environmental toxins. King Vultures in India are dying from exposure to diclofenac, a common anti-inflammatory in cows there. When the cows die, and the vultures eat their meat, the vultures are poisoned. It's even affected the Indian Zoroastrians' tradition of sky burial, with too few vultures to do the job. (And careful with that link – there are some slightly gooshy photos behind it. But the King Vultures are fine with gooshiness.)

I feel lucky to have Turkey Vultures as yard birds. Those in the photo illustrating this post were in my yard at the time, and they often fly overhead. But few vulture species are as common, and few have as secure a future as the roadkill-loving Turkey Vulture. The rest really need our help, which starts with awareness. After that comes working to promote (or require) bismuth bullets for hunting in condor ranges, research into (and banning of?) chemicals that poison vultures, designing human infrastructure and planning development in ways that allow the birds their space as well. But it starts with awareness of their beauty, the jobs they do, and why we need to help them.

Here are more links and stories about Vulture Awareness Day:

The goblins of Goblin Valley are friendly. No really. You can say hi. 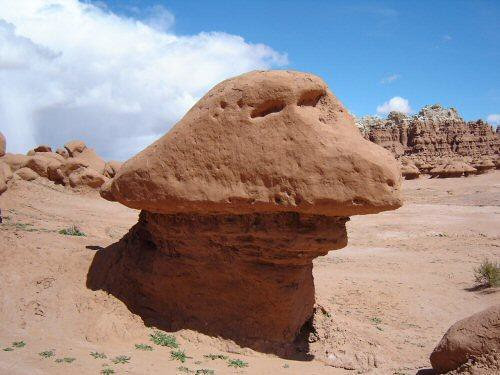 It's play time....
Originally uploaded by 713 Avenue.
This makes me wish I liked Monopoly more!

Monopoly City Streets is having a worldwide, everyone's-in Monopoly game using Google Maps as the game board.

There's not much news about it now, just the blog. Will it be worlds of fun, or will the boringness (okay, so I really get bored playing Monopoly) scale up with the size of the game board?
Posted by Mary at 5:15 PM No comments:

The Station Fire from around the web

Self Portrait
Originally uploaded by anosmicovni.
Mashable offers a great huge pile of embedded images and video from around the web to illustrate the ferocity of the Station Fire.

You know what's a scary thought? This fire grew and spread fast without the offshore Santa Ana winds that can pop up and push fires around at this time of year. I don't want to imagine what this fire might be like with the Santa Anas working their magic.
Posted by Mary at 9:56 PM No comments:

The Station Fire - this time with armageddon

For the next couple of winters, any storms with a lot of rain are going to make the San Gabriel range flow into debris basins and Pasadena.

After the Oakland Hills fire, officials sprayed the steepest hillsides with goo to glue the dirt together, mixed with wildflowers seeds - and the next few springs were stupendous. I'm not sure there's enough glue in the world for the San Gabriels, one of the fastest-rising and most fragile mountain ranges in the world -- but I hope they try something like that.

Thanks to Ian O'Neill for the pointer.
Posted by Mary at 8:48 PM 1 comment:

Who ya gonna call? 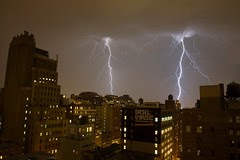 Originally uploaded by Claydo NYC.
Sometimes I wish California had the lightning storms they do back east.

We definitely get lightning, and parts of the state get intense lightning.

When I was little, in Shasta County, the grid wasn't as robust as it is now. We'd get days where the temperature would be 100, then 105, then 110, and sticky humid, unlike what we're used to in parts of California that aren't the northwestern corner. Then kaboom, the angels would start bowling, as Mom described it, and we'd have a huge storm, and the rain would pour. The power would go out, and we'd eat hot dogs cooked on unbent metal hangars in the fireplace, and pop popcorn in my mom's old campfire popping basket, and toast marshmallows, and sing. We were a girlscouty sort of family like that. Then we'd go to bed, and at some point the next morning, the power would come back on, usually just in time to power our tiny air conditioning unit in the living room so that as the temperatures rose back up into the 90s, we could lie in front of it and read. If the gutters were still running, we'd go block off the storm drain with detritus and walk around in our boots or pretend to fish.

There are other parts of the state that get lightning storms. But for the most part, we don't get big thunderboomers in California, the storms slide on overhead and aren't terribly dramatic.

We worry a bit when they come over, sometimes, as our summers tend to be dry, and a dry lightning storm can be troublesome. But lightning doesn't terrify me the way it can people in, say, Florida, where death by lightning is generally understood as one of the ways to go.
Posted by Mary at 6:43 PM 1 comment:

Rambles through our country 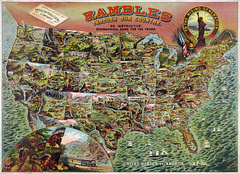 Rambles through our country, an instructive geographical game for the young, 1890
Originally uploaded by trialsanderrors.
Oh, I want to play! The chances of my finding a copy of this game are slim, I know .... but still. What a find.The Library of Congress has the image. I want the *game*.

(The caption says:
From the Popular Graphic Arts Collection at the U.S. Library of Congress....This picture is in the public domain.)