Three Gorges Dam pisses me off 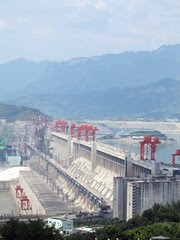 Three Gorges Dam @ Sandouping
Originally uploaded by e_hoogie.
I used some pretty colorful language when I first heard about this:

In unusually frank language, Chinese officials publicly acknowledged "hidden dangers" at the massive Three Gorges Dam, including landslides, erosion and pollution that could lead to an environmental disaster if not quickly fixed.
"If no preventive measures are taken, the project could lead to catastrophe," the official Xinhua news agency said on its English-language newswire, paraphrasing experts speaking at a conference this week. As an indication of the government's sensitivity to the issue, that phrase wasn't included in all versions published by Xinhua.

It was hailed as one of the engineering feats of the 20th century. Now the Three Gorges Dam across China’s mighty Yangtze River threatens to become an environmental catastrophe.

"We cannot lower our guard against ecological and environmental problems caused by the Three Gorges project," Wang Xiaofeng, director in charge of building the dam, was quoted as saying. "We cannot win by achieving economic prosperity atthe cost of the environment."

Geological instability isn't the only unforeseen negative effect of the Three Gorges. Downstream of the dam, locals have been battling two billion rats forced into farmland by rising water levels after the dam authority released a large amount of Yangtze River water "to control flooding in the face of the annual rainy season".

People have been crying about this for years. A friend of mine in the early nineties, while in her mid-sixties, took a boat tour down the gorge because she thought she'd never have another chance to see it if she didn't go now. People have said we'd lose the river dolphin, for years. People have warned against pollutant build-up in the water, where folks get water for cooking, and bathe their babies. They worried about whether silt would fill the basin too fast, given how muddy the Yangtze is, or that the silt and other materials carried downstream would damage the turbines. They rallied against corrupt officials mishandling the funds used to relocate people, and of people whose rich farmland on which their families had worked for hundreds of years would be flooded, while they were given rocky hillsides as compensation. They raised a fuss about the drowning of barely visited or newly discovered archeological sites, of the loss of historic temples, of the effect on the people below if something happened to breach the dam. But there wasn't anything anyone could do to stop this dam.

Now that the damage has largely been done, they admit that there could be problems.

I just want to kick somebody.
Posted by Mary at 11:14 PM No comments: