These are on my official Geography Table, thus the subject matter. But books like these comprise maybe 20% of my entire large book collection.

When I get my geopictures on the wall behind the table, I'll take books and blog about my geography table specifically, and why it's special. I just snapped this picture a minute ago and figured I'd share.
Posted by Mary at 4:35 AM No comments:

Jesusita fire from the air, with MODIS helping 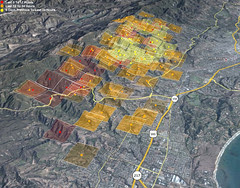 2009_05_08_jesusita_041
Originally uploaded by dsearls.
The caption says:
"A view of MODIS fire detections, looking east-northeast and across the fire perimeter from about 25,000 feet above Goleta. A new hot spot shows in the canyon above Patterson Ave, near some orchards (or vineyards) above San Jose Creek. Of more interest are the other new hot spots approaching Painted Cave, on the other side of 154 and near the ridge."

The Geography of the Jesusita Fire 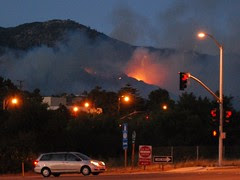 Large Flames of Jesusita Fire
Originally uploaded by artgalgenius.
Of all the fire articles I've read in a long time, this one caught my interest differently than the others, and I read it with a fresher eye.

Ray Ford's article in the Santa Barbara Independent looks a little at the rugged residents and the rock-tough firefighters, but it also touches on the wind, the topology, the vegetation, and other things that drive a fierce wildfire in California's chapparal.

This is geography. It's not just about what burns, or why, but about how it all works together, and anyone
who really wants to study fires, damage prevention, and effective fire-fighting in California probably knows all of this:

"Then without warning, the wind shifted, catching everyone by surprise. The shift was sudden and intense. Within a minute it switched from a 10-to-15MPH steady uphill breeze to 50MPH storm force winds heading directly down canyon."


And that, yesterday, is why the apparently mild-mannered Jesusita Fire went crazy, and is still out-of-control along Santa Barbara's northern flanks. The mandatory evacuation order includes areas just north and west of Santa Barbara's downtown. Flickr has plenty of pictures so far.

Google Maps has some LA Times coverage including where homes have burned, and links to stories. 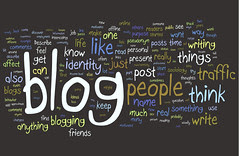 Blogging Research Wordle
Originally uploaded by Kristina B.
I started this blog for reasons very like Anne Minard's. It took me awhile really to get going, and I go on runs for bits of time. Then other times, writing ideas fizzle or I can't think of a way to make them geographilic (for awhile, I considered having one day devoted to related sciences, such as cosmology and astronomy, or environmental advocacy, and still might), or I get incredibly busy with non-internetty things like the garden, or the big family wedding coming up, and I don't keep up. I try to front-load with posts that aren't timely, but I don't want to throw meaningless drivel up here too often, either.

I'd appreciate knowing whether you read this blog, and if so, why, and what sorts of writing here most interest you. That will help me guide further posting. There might still occasionally be photos of baked clay squids with earths on their backs, though.
Posted by Mary at 10:26 AM 1 comment: