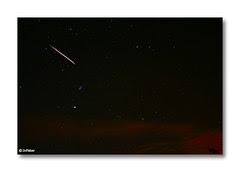 Lucky shot!
Originally uploaded by ♥♥ Jo ♥♥.
When I was a little girl, August was a scorcher where I lived, and we had a tiny, hot house. When it became too hot to sleep indoors, we'd spend a few nights outside on the lawn, in sleeping bags, and Mom would show us the constellations and tell us their stories. And right smack in the middle of August, we'd watch shooting stars. Shooting stars are always best in August, Mom told us. We'd stare and stare at the sky until we fell asleep, then wake at dawn.

They have a name now -- Perseids.
They have a scientific explanation. Mom told us they were rocks that flew through space and heated up when they went through our air, and that they almost never hit the earth because they burned up and were gone before they hit the ground. That's all we knew, and that was all that mattered, when I was six or so and sleeping on the lawn.
Posted by Mary at 9:44 PM No comments: