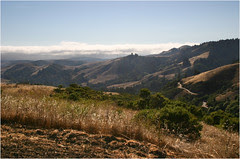 Stanford Foothills
Originally uploaded by tangent.
I noticed, while driving up I-580 west of Dublin, California (which is becoming a maze of condos and office buildings and supermarkets, Dublin is doublin') that the golden summer grass is becoming brown a little early. I'm the first to say "no, it's golden," when someone says that our summer grass is brown. It's golden. But it becomes brown, eventually, as the golden stems of dry grass bend over, and flatten, and more dirt is exposed. I usually start noticing the brown in mid- to late August, sometimes September, and the brown lasts until the first real rainstorms germinate more grass seed. Our last rainy season was abbreviated and light, it's a dry summer.

It's one of those things that means California, to me, the shifting colors of the grass (white isn't the winter color, here on the coast, green is), and the hallmarks of what we call seasons.

Lynn Kendall, in Unnatural History, discusses coming to California, and how much the local geography influenced her decision to move here from Pennsylvania, and ultimately, to stay here.

I remember my wonderful Sacramento City College geography teacher, years back, telling me that he decided to stay in California after he first visited from New England and saw a redwood tree and a palm growing side-by-side. (Of course, both were planted, our redwoods come from the northwest coast of the state, while the Washingtonia palms are from the southern deserts. But still.)

What does California look like to me? It looks like rolling golden hills, buckeyes that turn brown in July, broccoli-shaped oak trees, patches of bare serpentine soil in the dirt of the coastal hills, Sonoma County's cold and rocky beaches, gray pines above the chaparral. Sometimes it looks like exposed granite batholith, or lava tubes, or high meadows full of crimson columbine and beautiful purple shooting stars, or the grey-and-white cone of Mount Shasta. But mostly, it's our rolling foothills, our fire-adapted woodlands, golden California.
Posted by Mary at 10:08 PM 2 comments: