Do I corrupt my friends or do they corrupt me? 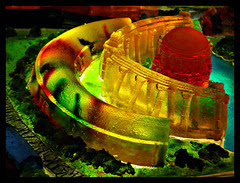 My friend Andy sent me this IM conversation with our friend Paul:

Paul: what is the tensile strength of ROCK AND ROLL quick I need to build this city on it
Andy: The tensile strength of ROCK AND ROLL isn't relevant. Unless you planned to build this city out of it.
Andy: Since you want to build the city *on* Rock and Roll, you'd want to know it's ductility.
Andy: The ductility determines how big the buildings can be without risking sinkage. also, in earthquake zones, low-ductility Rock and Roll would lead to liquifaction, damaging entire regions of the city.

I just had one of my best bird experiences ever.

I've been paying attention to birds since I was pretty young, but I rarely go out and seek the rare ones. I tend to marvel at what's nearby.

I'm very happy that I got to see a Long-tailed Jaeger once, when it was lost in Mono County, and I was very excited when my husband (decidedly not "a birder") identified a Heerman's Gull along a path a bit west of Monterey Bay Aquarium. But mostly, I revel in the air-coasting of Turkey Vultures, and the way the American Robins fill my yard every March, and the markings of the hundreds of Cedar Waxwings in our local trees (they have a wheezy, tuneless song that is irrelevant given their gorgeous fancy clothes).

I like birds for learning about what they do. I like being able to spot a Western Scrub-jay without glasses on (my glasses, not the jay's) from the way its short swooping glides bring it down from a tree, and I like knowing that we have Black Phoebes because we're near a stream, and they eat bugs (they're at the local dog park for the same reason: flies love those trash cans!), and I like knowing that though the Cooper's Hawks in the neighborhood might be after our chickens, the Red-shouldered Hawks would prefer our pocket gophers. Our garden is grateful for Red-shouldered Hawks.

Today's event was both wonderful for its commonness and what it told me about basic bird behavior, and exhilarating for its sheer wonderfulness.

I was out in the driveway collecting mail, and as usual, our rooster jumped up onto the chicken pen's gate to let me know he was Still The Man. He crowed, and I said "Hi, Rooster," then over my head, in the tulip magnolia tree, a male Anna's Hummingbird began his squeaky territorial chirping. It's fully spring here, so the hummingbirds are nesting, and Anna's Hummingbirds are the kings of the "Gerroff my LAWN!" attitude. (I remember reading an article years ago in Smithsonian magazine describing the hummingbird migration in Arizona. One ranger at a state park told a visitor that if hummingbirds were the size of ravens, it would be unsafe to go outside. When a visitor exclaimed about the belligerent males, "They're so sweet, and so tiny!" he replied, "Yes ma'am, they are tiny.") I noted to myself that the rooster and the hummingbird (also a rooster, in his tiny way) were doing the exact same thing, crowing at the entire world to say that they were indeed The Man.

I couldn't see the hummingbird (no glasses on, and he was in a tree with hummingbird-sized leaves and blossoms), but when he flew over to another tree and began to chirp there, he was obvious. The sun was behind me, and as he moved slightly on his stick-end, he flashed with an almost inorganic magenta, the refractive feathers on his head and gorget throwing photons back at me. And then in a flash, he went up, up, and vanished. I kept my eyes on him as long as I could, but he was, it seemed, nearing escape velocity.

Anna's hummingbirds have the most amazing behavior. Sometimes they swoop down in huge, steep parabolas, making a sort of … ding? bing? musical pop? at the bottom of the dive. They'll fly up, out of sight, then down. I've seen them do this before, from slightly to the side, watched them form the parabola shape. But this time it wasn't quite overhead, I craned my neck up, staring directly at the sky, and the bird quickly became a dot, then disappeared. I knew he had to be diving in a moment, but where?

Then bam! or rather BING! Right over my face! The bugger had dived at my head as I stared and I never saw him. They are very, very fast. From the sound's direction and volume and the sudden bzzt! of wings, I estimate that the vertex of his dive was 2 to 3 feet over my head, and that's close enough.

My heart pounded, I clasped my hands to my chest and said, "Oh BOY!" The little hummingbird was up again, and gone.

It's quite easy to make me happy, really.

Hummingbird Diving In Action from Science News on Vimeo
Photo on top from Alan Vernon.

Imagine being terrified of tiny tremors, for good reason

The recent 5.6 earthquake in Cuba brought down a house in Haiti, and killed two people (at least, so far).

In a country as shaky with aftershocks as Haiti has been, and recent torrential rains making life miserable for people who live under tarps, and still live in gullies (as they have for a long time), imagine if every time the earth shook just a little, you feared for your life. The people under tarps are wetter, but perhaps safer.
Posted by Mary at 12:51 PM No comments: 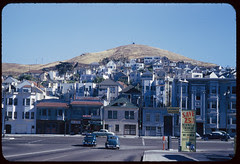 Then and Now: South Van Ness at Army Street, 1953
Originally uploaded by Telstar Logistics.
This is the sort of thing that eats my brain. Someone on livejournal asked where Army Street got its name. It's been 15 years since the name was changed to Cesar Chavez, but a lot of locals still think of it as Army Street, just as there are parts of Martin Luther King Bl. in the east bay that I'll always call Grove Street, just because I was living near there, or knew someone who lived near there, or shopped there, when it was Grove. I have nothing against Chavez or King, it's just that I'm old, and my brain settles into patterns.

At any rate: Now I'll be digging half the day looking for the origins of the name Army Street, because it's the sort of thing I can't let go, and I have things to do, and don't have time.

If you know, please help out here, or on livejournal at the link.

"As for Army, Loewenstein says it was named by John and Robert Horner, who bought two ranches in the area for $200,000. They named the street to honor the military. There was also a Navy Street, but it did not survive. Its name was changed to a number."

So far, the only relevant Horners I've found were in San Francisco in the 1860s. They did have ranchos, were they the Horners? Probably. Still searching.
Posted by Mary at 11:15 AM 1 comment: