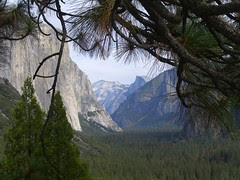 Powerful as [the photos] are, they can't evoke the sublimity of the place. I'm damned sure that I can't, either. That's why I've taken more than a month to even begin to fumble my way toward a post about Yosemite.

I grew up in California, and always thought that Yosemite was an overpriced, overblown, overrated, crowded, hard-to-reach tourist attraction, not much else. I couldn't imagine what drew everyone there. I was sure Galen Rowell and Ansel Adams had photographed all there was to see, with skill that made it seem more than it was.

One morning in about 1993, my partner at the time and I woke up early for no real reason, a bit before dawn. There we lay, wide awake, and one of us -- I don't remember which -- said, "Hey, let's go to Yosemite!" So we jumped in the car and drove for a handful of hours, first on straight freeway, then on the winding "north entrance" highway up through Groveland, and we were there. It was February, and a warm day for the month. The air at Yosemite was perhaps in the 50s, with snow on the ground, but clear dry roads. The sky was bright blue. We got there at 8 am, and were among very few people in the park.

As you come in from the north, the initial view is almost startling. "Oh. This is what they mean." I was entranced. It was as if I was in a display, a dictionary definition of natural beauty. This is all real, these immense mile-high rocks, this exposed granite batholith. And that was the macro-park. I was also captivated by the tiny, the deep chocolate color and fuzzy caps of the goldcup oak trees, and the black oak leaf that lay on top of the snow and was warmed by the sun, sinking as the snow under it was melted, and sitting (when I found it) in the bottom of a six-inch-deep hole shaped exactly like a black oak leaf. But then the rocks, so big! They are there always. In the spring, some of the highest waterfalls in the world plunge down their faces. (At the top are emphatic warnings: If you go in the creek there, You Will Die.) 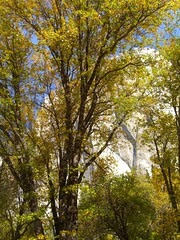 That day -- a pleasant weekday in February, few people, perfect weather -- was the best possible day for a visit to Yosemite. I've been there a handful of times since, sometimes with more people, sometimes fewer. I'm never let down. It is always amazing. It always makes me marvel at geology and geography, and the power of water (which, as ice, carved Yosemite into its present shape). It always makes me grateful for John Muir and his attempts to preserve it. I am always glad to live near enough to visit with relative ease.

You should go read Lynn's post about Yosemite, though. She says a lot more, and offers a lot more photos. :D

There are more great photos out there, including from Joe Decker, Buck Forester, David Morgan-Mar, pete@eastbaywilds, Denise Cicuto, and Sister Coyote. And I have a few more of my own.
Posted by Mary at 12:49 PM No comments:

Traffic stopped. Crowds wearing protective eye wear cheered and whistled as the moon covered the sun, the wind died and day became night.
Lucas Heinrich, a physics student from Berlin who traveled to Novosibirsk with classmates, described the eclipse as "unbelievable."
"It became cold and dark, and suddenly it was light again. I am very happy — it was worth the trip," Heinrich said.

It really is amazing, how much some people love eclipses. My partner and I travelled to England with his mother to see one, once. A few years later, she toured South Africa to see a total eclipse. I wish I could have gone then.

It was cloudy on Devon Island, but the Haughton Mars Project still experienced their first total darkness all summer. They have a Flickr set to show you what it was like. The research team is only there in the summer, so for most of those folks, the eclipse was the first time they've been to Devon Island in the dark. Elaine at HMP says there will be an edited video later.

Flickr is full of pictures. I love this one from Norway.
Posted by Mary at 9:54 AM No comments:

Getting to the bottom of this I'm all about exploration, but somehow, I found myself thinking, "Wait, that's private, maybe there are some things we shouldn't know." And I can't explain that reaction. I'm sure that I can logic my way out of it. It was a knee-jerk response.

I thought, "I'm not sure I'd want them to poke around on the bottom of Crater Lake like that," then thought, "Have they? . . . ." I wasn't sure. So I poked around in a web search and found out that yes indeed they have, then I got all interested in that science, and forgot that I was squeamish about scientists poking around on the bottom of Crater Lake, and that learning more about places (and things, and people) we love can be a good thing, as long as we don't hurt them (much) in the process.
Posted by Mary at 9:52 AM 1 comment: