Vernal pools rock my world. Essentially, they're ephemeral pools that only show up in the spring.

But in California's central valley, they're driven by an interesting mechanism: Huge chunks of the valley and low foothills are underlain by an almost impermeable clay hardpan layer that has taken years to form. In fact, California's soils have taken as long as three-quarters of a million years to reach the state they were in when gold was discovered at Sutter's Mill in the Sierra Nevada. Soil lies on top of that, and in the spring, at decreasingly diverse locations, the acres of shallow water gradually evaporate, leaving a nifty pattern of flower colors. First an early bloomer like bright yellow goldfields will fill in the open areas, then as the pools shrink, where there is newly bare soil, the next flower, perhaps purple downingia, will bloom, then creamy meadowfoam. 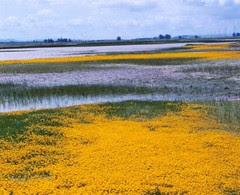 When the plow came to California, that started changing irrevocably. It wasn't so bad with initial, light tilling, but when deep plowing for real agriculture hit the dirt, the clay pan was ripped up, never to be replaced within a useful time period. Once that clay pan is gone, it's gone, and no amount of rehab within current technology can make the plains like they were.

One of my deep annoyances is that for the new UC Merced campus, the UC system had choices for location. They could rip up and build on a pristine vernal pool location, or they could make use of an old dairy farm that had already been disturbed and didn't have pools. They chose the vernal pool site. I am just boggled by that. Boggled. What goes on in folks' brains?

Anyway, I could fill this with links, but the other day on Flickr, the guy who runs the vernal pool pool (heh) on Flickr noticed one of my (not especially good, it's in poor light and from a bad angle) Table Mountain vernal pool pictures (on Table Mountain, the soil is underlain by a lava cap that protects the butte), and he asked me to put it in that pool. So I did, and rooted through the pictures there, as I love vernal pools, and they can be photogenic. When I found some of his photos, I immediately knew that Botany Picture of the Day would love them, and suggested he submit them. Not only did he do so, but the BPOD admin noticed my comment, and gave me a shout out for pushing the pics his way. There's usually a few days or weeks of turnaround for submissions there, but apparently they liked the vernal pool pictures, they got up there within 48 hours of my pointing BPOD out to the vernal pool admin.

So the links (and they go to info-filled and pretty places, have a look) are mostly off the BPOD post. Have a look.

Anyway, this is about how important California's vernal pools are and how they need attention and protection, not so much about "hey I got a shout out on BPOD." Most of the valley's pools are long gone. There are some left near Sacramento, and Dixon, and near Vina in Tehama County. The Nature Conservancy has snapped up chunks of acreage to protect them. And the University of California persists in not helping.
Posted by Mary at 8:13 AM No comments: