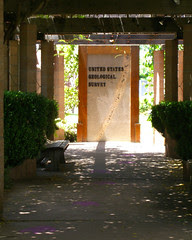 USGS Entry
Originally uploaded by marymactavish.
This here linked video is interesting in its own right, but why am I linking it? The globe over James Randi's shoulder? Oh, how much do I want that globe? I want that globe very much.

Also:
The USGS feed on LiveJournal just exploded out a bunch of old link summaries, but there's some fascinating stuff there. Have a peek: http://syndicated.livejournal.com/usgsnews/ You don't need a LiveJournal account to read it.
Posted by Mary at 4:46 PM No comments:

These five nearly two-hour lectures from Stanford University explains the role of geography in the recent United States elections. They were filmed through October and November 2008, just before and after the recent Presidential elections, in which American voting patterns of recent history were shaken up unexpectedly.

The importance of geographic literacy

Harm de Blij, author of lots of geography-related books, including half the textbooks I've ever used, discusses why geographic literacy, and the study of geography, is essential:

Scientists measure fresh water loss down a moulin on the Greenland ice cap:

First thoughts:
1. Do we have data on melt from a decade ago? from the early 70s? How much has it changed? There had to be some surface melt back then, or the winter snow would be thickening the ice cap every year. I'm sure they know how and why it's worse and scarier now.
2. I'm not fond of heights to begin with, and of abysses in general. I couldn't have hung from those ropes.
3. I was a bit annoyed by Dr. Box saying, "It's just bottomless. No light escapes." Was there some sort of light source at the bottom of the hole that light should be escaping from? But I sort of get what he means, his choice of words just didn't work for me. It's so deep and narrow that it goes black immediately, and once you're down there, you're down in a deep black pit, ice water all around you, battered by ice on all sides, and you're going to die.

I'm one of those people who believe our climate is changing, and that most, but not all of that change, is human-caused. Humans can adapt, but I think we'll lose a lot of biodiversity, like emperor penguins, polar bears (do I really need to link those stories?), and any plants and animals that already live at extremes of height or heat, whose habitats will change beyond their ability to adapt. In addition, animals that could move to adapt will be blocked by human change -- long, narrow reservoirs in Canada, cities and highways and farmland elsewhere in the world.

I'm a little glad for Greenland in the short term. They had some decades of being green a millennium ago, with dairies and farms. I hope they can make use of climate change to help themselves, for the time being.
Posted by Mary at 9:23 AM No comments:

The joy of cephalopods

I don't think I've seen such an ovation for short video clips before:

Look at the smiles on David Gallo's face, and in the audience. Listen to them gasp. Oh, amazing. I can't eat octopuses or cuttlefish, and I think I might be off squid now, too -- what amazing creatures these are.

solar eclipse from the moon

This photo was taken from a craft orbiting the moon, while the earth was between the moon (or at least the orbiting craft) and the sun. http://spacefellowship.com/News/?p=8229. WOW. People on earth would be seeing some degree of lunar eclipse, this says a penumbral eclipse. It's one thing to picture this, but it's gorgeous to see it. (After I originally posted this, my husband pointed out a simple oversight on my part -- From the moon, this would be a solar eclipse, as the earth is occulting the sun. Were the people orbiting the moon seeing the moon's shadow on the earth, with the sun behind, that would be a terrestrial eclipse.)
Posted by Mary at 11:57 AM No comments:

It's more complicated than that

I don't know enough to know if there's a "right" and "wrong" in the Middle East anymore, beyond my strident belief that theocracy hurts people, but I think people do forget that it's more complicated than it appears on the surface, these days. The first half of the twentieth century is often forgotten.


This is a long video, nearly half an hour, about someone who was there at the time. I think it's important.
Posted by Mary at 7:17 AM No comments:

I nearly popped with wonder at this video:

The surprise ending is astounding.
Posted by Mary at 4:58 PM No comments:

Geographers do it better? 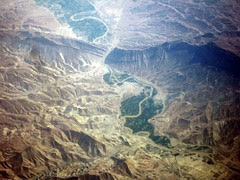 18 River cutting through ridge, Afghanistan
Originally uploaded by Phillage.
It would strike me as odd if the various covert and overt government agencies trying to find Osama bin Laden hadn't tried some of the methods posited in this article, but I still like reading them, having them spelled out so specifically. What among these haven't we tried? Let's try them . . . and hang onto Peshawar, if we can.

In informal conversations in the Geography Department at UCLA, we began to ask ourselves if the biogeographic theories we use every day -– theories that predict how plants and animals distribute themselves over space and over time –- employed in conjunction with publicly available satellite imagery, could shed some light on this question. The outcomes of this musing, presented below, are our thoughts and experiment. By bringing these methodologies to bear, it is our hope that a long overdue debate might bring bin Laden back to the fore of the public consciousness – and possibly to justice*.

I find this sort of geography fascinating, but I also can't imagine wanting to do it.

*PDF article
Posted by Mary at 2:07 PM No comments:

Me, I'm not that fond of so much lawn, if critters aren't eating it. I'd like to see half that much lawn, a whole lot of edible landscape, and perhaps native plants to attract wildlife -- but I'm a bit of a nutcase.

(More information and photomanipulated pics here - Tokyo is not really grassy like that.)
Posted by Mary at 9:39 AM No comments: 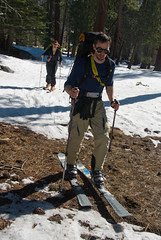 Drought In California
Originally uploaded by Amicus Telemarkorum.
It's pouring outside right now. Pouring. I hear from my friends who didn't grow up here that it's miserable, it's raining too much. If it weren't a cold winter rain, I'd be dancing outside, probably naked.

This is a fierce drought, we're working our way into the third year of not-enough-water. The snow is shallow in the mountains, and that snow is our biggest reservoir. Folsom Lake, Lake Oroville, Lake Shasta, all are low, marinas are high and dry, because we haven't had enough rain and snow, our water's being shipped all over the state, including to rice farmers in the northern valley (when, in good years, rice growing replicates normal valley flooding, but in dry years, uses a lot of extra water) and to the west side of the lower San Joaquin Valley, where water-hungry crops grow on poor soils in near-desert.

Our population is growing, our climate is drying -- we do not have enough water.

It has been pouring, and the snow levels are low. It can continue to pour. I am fine with it. 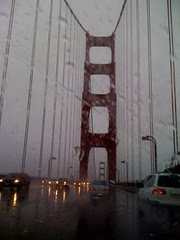 That's great, it starts with an earthquake, birds, snakes, an aeroplane. Lenny Bruce is not afraid. 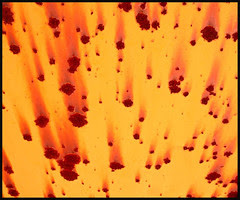 meteor storm
Originally uploaded by eYe_image.
Phil Plait is requesting data about the fireball over Texas today, to track it and figure out what it was. If you are from Texas and saw it, or know someone who is or did, please go to his post at Bad Astronomy to report.
Posted by Mary at 11:15 AM No comments:

LA Aqueduct Cascades
Originally uploaded by Aquafornia.
There's a double whammy of fortune for folks who want to save electricity and water in California -- Peter Gleck, of the Pacific Institute, a global water research center, says that here in California, we can save electricity by conserving water.

We spend so much electricity shipping it around the state and drawing it up from the ground that using less will save power.

From WorldChanging at The Guardian:

The virtues of water efficiency can be found in California and China - regions where water shortages have become emergencies and droughts may worsen with climate change. Conditions may become more severe in the future as consumers turn to water solutions that often require even greater energy supplies.

In California, where drought is afflicting the land for the third year in a row, the state is reducing water deliveries by 20-30 percent this winter and warns of "the most significant water crisis in its history." The water shortages are forcing farmers to cut production and lay off employees in an already sour economy.

Meanwhile, water transportation, storage, and treatment account for about 19 percent of the state's electricity, according to a 2007 California Energy Commission report [PDF]. To reach the rapidly expanding urban clusters in southern California, for instance, water is pumped 2,000 feet (610 meters) over the Tehachapi Mountains north of Los Angeles.

Mind you, hydroelectric dams create electricity -- but that won't be reduced as we use less. And as the Sierra snowpack melts away with climate change, we will likely lose most of that reservoir, the snow itself, and have to find more ways to store water in our (ostensibly) wet winters to have enough to last us through our dry, dry summers. We'll either have to build a lot more dams, or find other ways to get (and save) water, and to generate power.

California's population is burgeoning, as well. We will, as a whole, want more water, not less, in future years -- and more power. By cutting back now -- growing dry-climate and native gardens, using landscaping water to grow our own climate-adapted food rather than lawns and privet hedges, moving California's crops into areas better suited for them, controlling water use in new developments, and other water conservation measures -- we can use less of the inevitable additional water, rather than more.