that's what suspension bridges are for

Watch what the subway does to the Manhattan bridge:

I was poking through Grant Imahara's stuff on Twitpic, and found this bridge photo. It's a "from the set" photo, so I assume it's in California, though it might not be. It has California native palms, though Washingtonia palms are used in landscaping so they're everywhere now. It's recent, so it's not the new Zampa bridge being built at Carquinez Strait, right? And it doesn't look like Carquinez Strait anyhow. Where are other steel truss bridges that high in California? What's going on behind it, are they working on a new bridge?

I'm going to poke around online until I find it or can't justify not getting up to plan for a trip we're headed out on soon. (I'll take pics, I could just turn Geographile into a vacation pictures journal. Wouldn't that be fun. :) )

In the meantime, if you know where this picture was taken, please let me know. This isn't a Mythbusters fan thing, it's a MUST KNOW GEOGRAPHY thing. It's an obsession. Clicking through on the picture will make it bigger for you.

(edited to add: Old span of Bay Bridge with new one under construction behind it. I see this a few times a week. But the scale seemed all wrong to me, this seemed much too small for it. Also, I didn't recognize the foreground, which is probably in Alameda or along the Oakland waterfront. Thanks to Paul and Bill for nudges.)

Edited again, July 24: DUH! Casey pointed out that I could have the direction completely wrong, and I did. Google maps confirms it's along Avenue N in the northeast corner of Treasure Island, in the middle of San Francisco Bay.
Posted by Mary at 10:15 AM 2 comments:

(maybe not) just one more 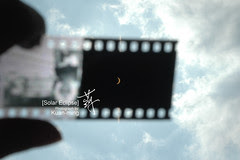 Bring on the quakes

Yes, it's a lovely picture of totality, but so many of those show just the moon and corona and maybe a diamond ring.

But for this, having the boats in the foreground, and the clouds, and the slight texture of the water, make it truly amazing to me. This would be a fabulous print... at least, for nerds like me.
Posted by Mary at 10:18 PM No comments:

日蝕 Eclipse
Originally uploaded by holst7.
Some nice eclipse photos are starting to come in from Asia.

So far, so good on the megadisaster. I found more than a few things on the web warning folks to stay off the beaches in India because of the potential for a massive quake in Japan that would somehow cause tsunamis in India.

My fingers are crossed that Asia won't coincidentally have a big quake in the next few hours, or we'll never hear the end of it from people who think the eclipse caused it.
Posted by Mary at 8:01 PM No comments: 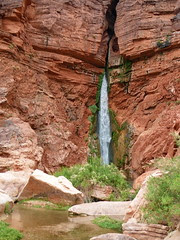 Deer Creek Falls - Grand Canyon
Originally uploaded by Al_HikesAZ.
From John Wesley Powell's journey through the Grand Canyon, leading a team of the first people to go down the Colorado River in boats:

The upper two-thirds of the basin rises from four to eight thousand feet above the level of the sea. This high region, on the east, north, and west, is set with ranges of snow-clad mountains, attaining an altitude above the sea varying from eight to fourteen thousand feet. All winter long, on its monutain-crested rim, snow falls, filling the gorges, half burying the forests, and covering the crags and peaks with a mantle woven by the winds from the waves of the sea -- a mantle of snow. When the summer-sun comes, this snow melts, and tumbles down the mountain-sides in millions of cascades. Ten million cascade brooks unite to form ten thousand torrent creeks; ten thousand torrent creeks united to form a hundred rivers beset with cataracts; a hundred roaring rivers unite to form the Colorado, which rolls, a mad, turbid stream, into the Gulf of California

My battered copy of this book, which I bought for 25 cents from a box in front of a small used-bookstore, is one of the geographilic books I can just lie around and read bits of, over and over again. 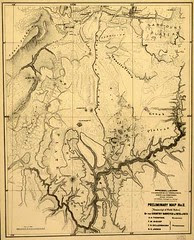 , with one arm, with food supplies that got wet and moldy over the weeks, with boats and crew gradually wearing out and falling apart, or leaving the party, made it, more than once, from one end of the Colorado to the other, and wrote richly about what he saw there.

Of course, then we submerged many of his cataracts and fern-lined canyons with the reservoir that bears his name. 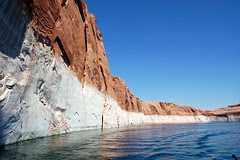 sunrise
Originally uploaded by Fotopath.
Thank God men cannot fly, and lay waste the sky as well as the earth. ~Henry David Thoreau
Posted by Mary at 7:47 PM No comments:

Adventure for its own sake ... and for science 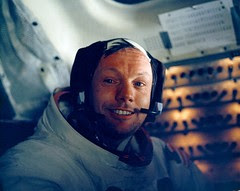 Neil Armstrong After Apollo 11 EVA.
Here men from the planet Earth first set foot upon the moon. July 1969, A.D. We came in peace for all mankind. ~plaque left by Apollo 11

When I was a little girl, we would lie out in the back yard, or on the hood of the car, and stare at the moon, trying to see lunar landers. Mom never told us it was ridiculous for us to try to look, that we'd never see it. She never pretended she saw it, or tried to give us false hope. She just allowed it. She patiently listened as we came in to tell her our stories, sure we'd seen it. She ignored bedtimes, when Apollo missions were working. She made sure that we got to watch them on TV, every single time, every launch, every moon landing, every splashdown in the ocean at the end. It was part of the fabric of my childhood.

This picture of Neil Armstrong after his first Apollo moonwalk, or EVA, on July 20, 1969, is one of my all-time favorite astronomy-related photos. Look at his face: It is glowing with rich delight. 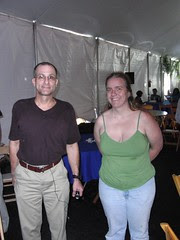 moonfestCIMG2446
Originally uploaded by marymactavish.
Don Pettit is up there among my favorite astronauts because he's *so* nerdy, so much fun, his science videos are wonderful.

He's truly and simply excited, and good at explaining the science he's researching in space, as well as other little things like "how do you eat peanut butter and honey in space?"

He's got a strong sense of wonder, and appreciates the question "what will happen if I do this?"

Dr. Pettit spoke at NASA Ames Moonfest, which is the main reason I went.
Some of my favorite questions from people at Moonfest:

"Can you see a solar eclipse from space?" from a kid. Pettit said it looked like illustrations in a textbook, with a visible umbra and penumbra on the ground, and yes, he's seen one.

One very young child asked, "How old do you have to be to go in space?" Pettit said that technically there's no lower age limit (upper either, for that matter) but that people should go to college, get a degree, then do something with it that shows NASA that you would be useful on their team. Most folks are within a few years of 40 when chosen. And he's going back in a couple of years, via Soyuz, to work on the ISS again.

One child asked, "if you sneeze in space is there just a glob of spit floating around?" There was much laughter. Pettit said that when you sneeze on the ISS or shuttle, you can just reach out and grab it with a dry wipe (I suppose that would be the glob, rather than the atomization), but inside a helmet, "You just have to live with the results."

Pettit also shared that they call the new toilet -> urine-processor -> galley setup the "coffee machine" as it turns yesterday's coffee into today's.
Posted by Mary at 10:39 PM No comments:

Robert Glennon on the water crisis


Thanks to Aquafornia for the link pointer.

(Perhaps we shouldn't be drinking from the toilets, but why not put a hand-wash basin on top of the toilet?)
Posted by Mary at 5:56 AM No comments: