It's flash, so I can't embed it, but just *listen* to the cooling lava tinkle like broken glass as it falls off the face of the flow:
Awesome volcano video, not so pleased about non-embeddable flash, but heck, it's a Canon ad, no?

Playing with the Devil

Playing with the Devil
Originally uploaded by skarpi.
Yahoo has very cleverly made a "yahoo editors' picks" account on flickr to organize pictures in galleries.

These are their favorites for the Iceland volcano:
http://www.flickr.com/photos/yahooeditorspicks/galleries/72157623855495574
Posted by Mary at 10:18 PM No comments:

Dan Satterfield linked on his facebook page this news video of the meteor that lit up the midwest last night:

A large flash of light at about 10 p.m. Wednesday night – described as a fireball in the sky by eyewitnesses from Wisconsin to Missouri – was most likely a meteor from the ongoing Gamma Virginids meteor shower.
It is unknown whether the meteor in Wisconsin, which was seen flying eastward at an altitude of 6,000 to 12,000 feet, hit the ground or burned up in the atmosphere.

There's more at that link.
Posted by Mary at 5:41 PM No comments:

Updates on the European ash situation

From AlJazeera, an information-filled and relatively accurate story (text story at that link) about the effects of Eyjafjallajokull's eruption:


The BBC has more too, on their site, including this important tidbit: "The UK's air traffic control service (Nats) said no flights would be allowed in UK airspace until at least 0700 BST on Friday amid fears of engine damage."

Because the clouds make it hard to see a visible-light photo, the Norwegian meteorological office released this one 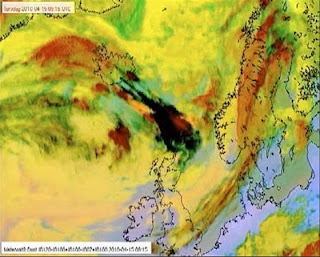 (I'm a tad embarrassed to ask: What wavelength is this? not infrared.)

The glow from the ground:

My initial reaction was actually (in text, to a friend), "omg omg omg omfg geology."

Right now, several airports in Europe (specifically Norway and the UK) are closed because of ash.

Boston.com's "The Big Picture," one of the best photoblogs on the web, collected pictures of the volcano and its effects today. Some aren't the usual fare, some are especially dramatic, but I think one that most caught my eye was #11 - people in snow gear, standing on dirty snow with ski poles stuck in it, watching flowing lava from a few feet away.


(And for the sake of fun: KCBS said, on twitter: "Why we're just calling it 'a volcano in Iceland'. Try saying this: Mt. Eyjafjallajökull (ay-yah-FYAH'-plah-yer-kuh-duhl)" Wikipedia provides the IPA [ˈɛɪjaˌfjatlaˌjœkʏtl̥]) and an audio clip to unconfuse things.)

I did spot one major technical/factual mistake, though.

(Have I posted this before, years ago? I should look. But it's a cold, rainy morning, and the dog is asleep on me, and that sounds like a lot of work for today.)
Posted by Mary at 12:22 PM No comments: