ah, for the wide open skies

I grew up under stars like this, but now I live in the city, and I live in a city that gets marine layer fog many nights all summer. An onshore breeze brings the low clouds in around 4 or 5 pm, and they go out again the next morning, but we can't ever count on seeing the sky.

Next spring, I think, I want to go up to Northern California -- the northeastern corner, Modoc County, and camp for a few days, and watch the Milky Way move like this: 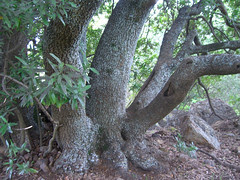 Bay laurel - Chabot Regional Park
Originally uploaded by marymactavish.
When I was young, I used to seek out nooks like this in the woods near our house, and make forts, and spend hours. Those woods now hold a housing development.

Later, when my mother was engaged to a man with a huge ranch in Tehama County, we'd go out with him and help flake the hay for the cows (picture two kids, 11 and 7, riding on the top of a big pile of hay on a pickup truck, cutting the bale wire and flicking flakes of alfalfa off the back of the truck onto the hills in a meandering line, as the truck was slowly driven, cows lining up behind the truck, the kids working their way down, down through the stack of hay, until the truck was empty, it was a big job but it was just a basic kid chore) then he'd drop us into a little gully to play as he ran around and fixed fences and did rancher things. We'd get up under the oak trees and build fairy lands in the undertree litter, or play hide and seek, or make forts, or even read. We learned young how to avoid rattlers and poison oak and even mountain lions (uncommon, but not at all unknown), and we stopped thinking about them, they left our daily consciousness. I think Mom thought of them as one risk of a natural childhood. If one of us had gotten badly injured, we'd have been well away from help until the truck came back a couple of hours later, we were at least three miles from the nearest house. But we didn't think about that, and we were happy, and well exercised, and strong.

As an adult, I still seek out the nooks, the undertree forts, the thick, strong trees, the places that feel safe.
Posted by Mary at 7:49 PM No comments:

Geography as a fascinating and relevant subject

The youtube account holder is "geogfilms," so I expect enthusiasm and lack of objectivity. ;)
Posted by Mary at 8:27 AM No comments: