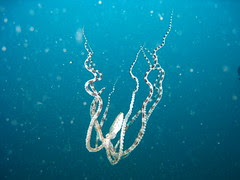 Mimic Octopus
Originally uploaded by Daniel, Daniel Kwok.
Like everyone, I sometimes have days on which I do little but watch octopus videos:

This species, the Indonesian mimic octopus, was just discovered twelve years ago. It is fabulous.

It's known to mimic at least 13 different animals or corals, some of them deadly poisonous, though scientists admit they don't always know what they're seeing.

They're lost due to habitat degradation, fishing bycatch, recently even the pet industry.

It saddens and sometimes horrifies me that we can be doing such damage to species that weren't identified by scientists until our current crop of high school students was first learning to read.

I don't eat octopus, and I do what I can to help protect its habitat and the creatures in it. Biodiversity is essential, no species is completely expendable, but octopuses are just too damned cool to lose. 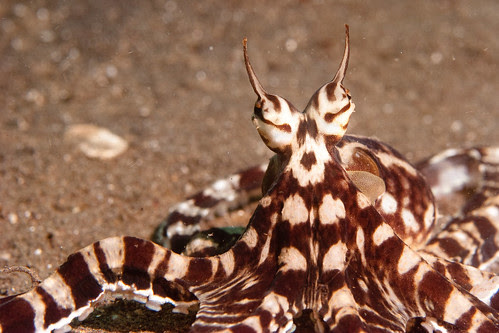 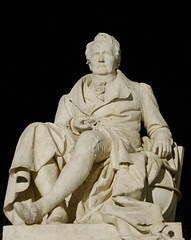 Alexander von Humboldt
Originally uploaded by Sebastian Niedlich (Grabthar).
Matt Rosenberg pointed out on twitter that the Einstein geography quote I posted (which I'd found on a university's geography department homepage, so trusted without thinking) was debunked: ".... this quote was actually written by Duane F. Marble, Professor of Geography at Ohio State University." The rest of the story is at the link.

I'm a little disappointed. It would have been an awesome thing for Einstein to have said.
Posted by Mary at 8:25 PM No comments:

The Grand Canyon from the ISS, by Soichi Noguchi

"As I mentioned, Mr.President, Grand Canyon is breathtaking!"

Soichi Niguchi is way up on my list of all time favorte astronauts, if for no reason other than his sheer delight in photographing the Earth.
Posted by Mary at 7:07 AM No comments: 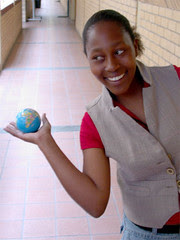 it's a small world
Originally uploaded by frerieke.
"As a scholar, I wanted to study Geography. However, upon examination of the subject matter, I found it too difficult and reluctantly turned my attention to the study of Physics" - Albert Einstein

(possible correction)
Posted by Mary at 2:34 PM No comments:

Wallpapering with rocks and dirt 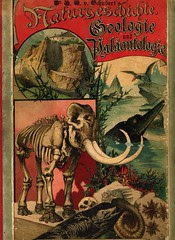 Natural History Book from 1888
Originally uploaded by Valeriana Solaris.
A huge chunk of my time for the past couple of days has been spent reinstalling Windows. It turns out that one can save a lot of time doing it right the first time --who knew? But I have a cranky old laptop, and only moderate computer skills (and a life, with other things to do), so I've been stuck with my old Treo for internet use for awhile.

While I was looking for interesting replacement wallpaper (eagerly anticipating a switch either to a Mac or to Windows 7, so I can rotate wallpaper -- decisiveness isn't my forte, I'd rather rotate nice wallpaper than have to decide) I stumbled on this neat blog I'd never seen before:
Geological Musings in the Taconic Mountains and today's relevant post, Geology Desktop Images.

I haven't yet poked around on it (still setting up my laptop) but will as soon as I've truly up and running.
Posted by Mary at 9:49 AM 2 comments: