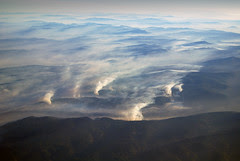 California Wildfires
Originally uploaded by HawkeyePilot.
What is it like to live with the fear of disaster? How does living with the day to day fear (like my seismophobia, witness a blog entry) compare to that of living with nearby fire, or fire season, or tornado season?

I don't know, really. I can't compare. I've lived in minimal-disaster-risk country. I've lived in fire country (Plumas County, California, and along Goyder's Line in South Australia) when I wasn't aware of fire danger, and when I was only vaguely aware. I don't remember what it was like now, compared to my probably unhealthy, vague anxiety about living right on top of the Hayward fault.

According to research at the National Science Foundation:

"In general, people are familiar with fire and understand a good deal about its mechanics, so fire risks are often underestimated or discounted. In contrast, the unfamiliar, invisible hazards posed by electromagnetic radiation tend to appear riskier and draw more concern and demands for government control."

That doesn't sound quite right to me, but it's research-backed, while my hunches are only hunches. We talk a lot about quakes here in the SF Bay Area. Some of us are vaguely antsy much of the time, some are rational and careful, some ignore any risk at all. But other places I've thought about living -- Portland, Oregon, most usually -- have risks too. Portland's had fierce and dangerous wind, it has the potential for a massive quake (though like on the New Madrid, their quakes are also less frequent than ours), and as California dries out, so will Oregon, and perhaps it will eventually be like central California is now.

Many of us live with risks. Some of us know it. Some are able to ignore it.

California is on fire, this summer. A lot of people are shaking in their boots.
Posted by Mary at 3:54 PM No comments: