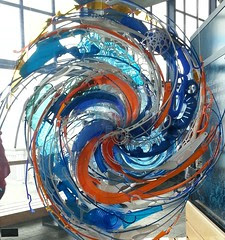 the north Pacific gyre
Originally uploaded by marymactavish.
Posted by Mary at 5:13 PM No comments: 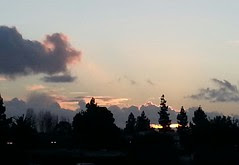 headed SanFrancisco-ward
Originally uploaded by marymactavish.
Contrary to meteorologist expectations, this winter has been way too dry. This part of the state, in La Niña winters, can go either way, wet or dry. Prognosticators wait until late in the year to tell us how it will likely go, and at the last minute, last year, they said it'd be wet.

Dry Januarys are not that unusual, even in wetter years, but this winter is just... too dry.

That said, chilly dry nights can make for lovely sunsets.
Posted by Mary at 5:43 PM No comments:

Huell Howser has died, and I am very sad about it

Huell
Originally uploaded by MrFabesBird.
I had other bloggy plans for today, but hey, Huell Howser died.

Years and years ago, I flicked on TV to see a show about a place that I, a fifth-gen Californian who thinks she knows a lot about it, had never heard of, the Calfornia Poppy Preserve. It was Huell Howser's KCET show, "California's Gold," or as Huell would say, "California's Gold!"

Dang that man had enthusiasm, and it was contagious. He was from Tennessee, California was an adopted home, and he was in love with it.

It just occurred to me as I started writing about this that a big effect he had on me was to teach me an appreciation of parts of California I didn't know much about or hadn't thought of as beautiful or fascinating. I am intimate with northern California. I love the redwoods, the scenery of the live oak woodlands that form a bathtub ring around the valley, I love the smell of sage in the high desert.

But the underground houses of Fresno? La Brea tar pits? And I hadn't even heard of the poppy reserve until he told me about it, and I visited it from up in northern California the very next spring.

Looking for a picture of him on flickr for this post, I come across a mention that someone tried a small halal market after he mentioned them. And the caption here, sadness.

But it's not just that.

Cal Humanities said on facebook, "With wonder and warmth, he illuminated spots familiar, obscure, and magical across California through his public TV series."

He was full of wonder. He overflowed with wonder and delight. He had the kind of wonder that made people -- that made me -- want to pay attention to what
we were at risk of losing, in California, if we didn't protect our environmental and cultural heritage.

And he really loved people, so many different kinds of people were interesting to him, it's like he knew that the world takes all types and that any given person probably has a lot to share if you ask the right questions. Sometimes I look at how judgemental I can be about people who see the world differently than how I do, and I'm ashamed of that, thinking about how he related to others.

Here is perhaps the most touching comment I've read in social media, so far:

"They used to show California's Gold on Armed Forces Network when I lived in Japan and I recorded all the episodes. And when I was feeling homesick, I'd watch them sometimes." (She says I can attribute this to "Roxanne Cooper --5th generation Californian." Maybe it's that so much of California seems ethereal or transitory, but we long-timers like to point that out.)

I hope Huell somehow knows about Roxanne watching him in Japan to soothe her homesickness for California.

That says most of what needs saying, right there.

More:
LA Times, "Huell Howser dies at 67; TV host profiled California people and places"
His YouTube channel has a lot of video, check it out and see for yourself