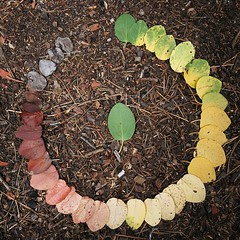 Manzanita
Originally uploaded by robherr.
I've written before about how much I love manzanita.

I want to learn to discern the various California species, but Pete Veilleux over at East Bay Wilds, who really knows his local native stuff, says it's a difficult task.

Among my classes this term are a couple or three that focus on local natural history. That should help.

Martin pointed out this gorgeous circle of manzanita leaves from Rob Herr, at Flickr. (He granted me permission to use the photo, it's not in the creative commons realm.)

The leaves are so beautiful and special. They're sclerophyllic, tough and a little leathery, to survive the hot, dry summers of their western habitats. The leaves chemically change soil to make it harder for competing plants to grow. And the colors, oh: they start so delicately green, and toughen to a darker green, turn reddish, then before they're gone, it's as if they self-immolate, without flames, they just dry and blacken. (They sometimes fall off before this stage, too, but it's weird, like someone's lit them.)

Their angle on the plant maximizes sun exposure when the sun is less direct and drying, in the morning and late afternoon, but minimizes it at midday, conserving moisture.

I love manzanita. Later, I'll write about the fire ecology around it and chaparral, and its magical bark, and what I want to do with the wood.
Posted by Mary at 5:01 PM 1 comment:

Howard Zinn, RIP - and he will 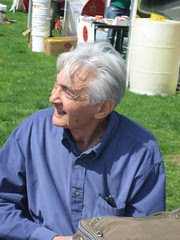 Howard Zinn
Originally uploaded by teeping.
"We don't have to wait for some grand utopian future. The future is an infinite succession of presents, and to live now as we think human beings should live, in defiance of all that is bad around us, is itself a marvelous victory." -- Howard Zinn, August 24, 1922 – January 27, 2010

Howard Zinn was a great historian. I encountered him in high school, and if he did nothing else for me, he encouraged me not to take everything my textbooks said as the whole truth and end of the story, but to ask questions and think beyond curriculum. I've applied that to most of what I've read in academia and the media in the decades since.
Posted by Mary at 1:10 PM No comments: 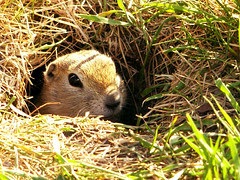 checking the weather
Originally uploaded by dave~.
Lately I've been wanting to know more about who's reading Geographile, and why.
I don't get a lot of comments, nor do I troll for them. I'd like to make the blog a little more interactive, but I avoid all those "get more comments" web pages and similar, I'm mostly here for myself. But I know there are readers.

I don't use site metrics. I don't beg for comments. So how do I find out who's here?

I must not have had my creativity hat on, because when I saw this Coyote Crossing post, it was so obvious.

If you’ve been reading Coyote Crossing for a while and never said anything, or even i this is the first time you’ve been here, consider this your formal invitation to introduce yourself, say hello, offer advice or complaints, or just generally mark a little bit of territory.

Go ahead and substitute Geographile for Coyote Crossing, except, in the marking territory category, I must say: Please don't pee on my blog. Thank you.

And while you're at it, check out Coyote Crossing, too. It's insightful, full of good information, and just plain interesting.
Posted by Mary at 6:49 PM 9 comments:

Well - not really ferocious. We just so rarely get tornados, that when we do, it's a bit startling.

Our tornados in California are almost never as high as 2 on the Fujita scale, and are usually 0 or 1. This one touched down, but well away from where it could do damage.

I keep thinking, "Now I'm going to write about this wacky week of weather," but then we keep having more days of it, and I think, "As soon as it's done ..." Rain is in the forecast, but it looks like the wildness is calming down. Perhaps it's time.
Posted by Mary at 12:46 AM No comments: