Nothing's where you think it is

"What do maps have to do with social equality, you ask?"

The good doctor (don't let me say "phlox" here) has a point. Size on a map matters, kids grow up seeing disproportionate sizes, and perhaps, attributing disproportionate values, even unconsciously. I think that as they learn mapping, learning about different projections, and the reasons for them, will continue to be important.

When I lived in Australia, I had a "corrective map of the world."

How much do these things matter? Why?

The teacher's sick today, so we'll just have a video

The hydrologic cycle!
Posted by Mary at 10:59 AM No comments:

I'd never even heard of the Sloth Bears of Sri Lanka. Wow.

The subsequent parts of this documentary are at http://www.youtube.com/user/neofelisman

There's more to this than Sloth Bears, of course. There are vultures, leopards, deer, buffalo, the aboriginal Vedda people, hornbills,
Posted by Mary at 9:20 PM No comments:

Scientific literacy for girls - it's like seeding the future

Maybe I just cry easily, but this video from the National Science Foundation pushed me over into tears:

I'm saddened when I listen to teenagers, or even adults, or read what they've written online, and it smacks of scientific illiteracy, or even scientific ambivalence.

A couple of years ago, I took a college-level class in which we studied, among other things, the effect of the full moon on behavior. Study after study we examined showed that even when, for example, emergency room staff or police officers say people behave more wildly during a full moon, statistics -- based on arrests, ER visits, psych ward incidents, and other apparent behavior measures -- show that there really is no causal relationship between behavior and the phase of the moon. (In the few small studies that show some minor correlation, it can be explained elsehow, e.g. the full moon only increased wild behavior when the weather was also warm and folks were hanging out on the street more.) But after this investigation, students still insisted that no matter what science suggested, they knew that the full moon affects behavior because their nieces and nephews threw more tantrums, or they saw more chaos on the job, or whatever. Science was irrelevant. They didn't seem to get how it worked.

These are kids who will grow up as better critical thinkers, with experience reading about science and learning how it applies in "real life." Their own experiences and perceptions won't, as much, form the bases for their realities. Their understanding of what is possible out there, both in science in general, in the universe, and in their own lives, are forever expanded.
Posted by Mary at 8:18 PM No comments:

Now it's your turn to ride across North America 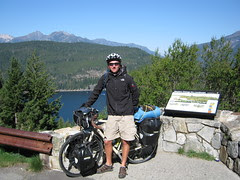 IMG_0180
Originally uploaded by nathan andrew winters.
Nathan Winters just finished a ride from Maine to Washington to raise awareness and money for The Nature Conservancy. His photos document the miles. He reached a small portion of his very ambitious goal. You can help fill it out at http://www.firstgiving.com/follownathan
Posted by Mary at 6:33 PM No comments:

The Origin of Life on Earth