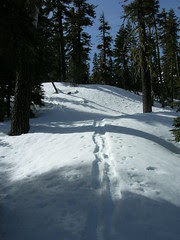 DSCN1943
Originally uploaded by gman8.
In the early nineties, I took a geography lab from the best geography teacher I’ve ever had, at the best community college I’ve ever attended.

The class was sheer fun. For our first field trip, he asked us each to find cross country skis or snow shoes, then brought us up to Lassen Park in April, when the road was still closed by deep snow. We’d spent some time learning how to take field notes, find directions, and other elements of geography field work, and when we arrived at the park, someone asked, “Is there anything special we should be noting?” He replied, “No, really, I just wanted you to see what Lassen is like before the road opens.”

It was quiet, and everything was white. The fumaroles steamed from underneath the snow. He warned us about the hollows that melted out around the fumaroles, capped by snow, and told us about participating in the rescue (because he works in Lassen back country rescue, did then, still does) of a man who had fallen face down into a pit, and would suffocate down there if someone couldn’t get their face down there and provide him some rescue breathing until help could arrive to pull him out, which was considerably later.

He pointed out mountain chickadees by their calls, and explained the geology of the mountain. The joy he felt in this snowy park – his place, which he knew intimately, and wanted to share with us – was palpable to the point of magic.

Everything about that class, and its prerequisite basic physical geography classroom course, seemed to be because the teacher thought it was cool, that he wanted us to see these neat things he thought were cool. From him I learned how rare the Mediterranean climate type is, and he shared with us that he first settled in the Sacramento Valley, in the sixties, because he crossed the Sierra and saw a redwood tree and a palm tree growing side by side, and was charmed. When we learned about weather patterns over and currents within the ocean, he told us about his summer fishing in Ireland, when a hurricane in the Caribbean managed to send lobster pots up the Irish rivers. He spent a big part of one class playing us an NPR show about people who had been struck by lightning and survived.

That magic hooked me. That magic sucked me into geography as a field, something I could do, rather than a dry high school course where we figured out adiabatic cooling rates.

Geographiles would be a lot better off if more people who are captivated by the magic would actually teach it, write about it, and share what we love. Perhaps that’s a call to action.
Posted by Mary at 8:40 AM No comments: 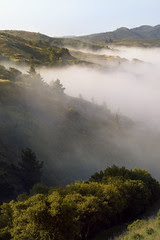 Originally uploaded by Molly Wassenaar.
I grew up in a Northern California town where we had wet winters, hot dry summers, and mostly dependable weather. It wasn't quite mediterranean, like the San Francisco bay area. Winters were colder, we had snow now and then in the winter, sometimes deep enough to sled in, sometimes lasting a week or more. Summers were hot, with three-digit days unsurprising.

Last time I was there, it was 118F in town, so I took refuge at the lake, where it was only 115, and camped out that night with no tent, lying on top of my sleeping bag, and only a sheet over me all night, to keep mosquitos off.

In seventh grade, I moved to the San Francisco bay area. I remember very clearly waking up on my first school morning there, to walk the mile or so to school, and needing a sweater. It was grim out, and I hated it, and was immediately homesick. But like on most days, it cleared up by 10 or so, and was bright and not too warm after that.

It was springtime in the bay area, and cool, with a thick marine layer. These days, still living in the area (after forays into other parts of the state, and one other country), I often appreciate the fog in the morning, it can easily keep a summer day below 80F. From late July to early September, the sea warms up enough that we lose the layer, and it can get quite hot here.

Last week, I got back from my third visit to New England. The first time we were there, just after summer solstice, it was 100F and 95% humidity. Folks told me it was unseasonably warm. I got sick. It was horrible. I wasn't used to it. Other people there were used to it, and while not happy, managed. This last time, it was less hot, but warm enough, and I went hiking at Middlesex Fells Reservation. It was truly lovely, but the sweat never dried on my back. Stilll, I remember thinking, "Everything is green, and this is nice, but it's stickky. It's not my weather."

I'm so rooted in central California, now, this weather is my weather. I've always lived in in the SF Bay Area or north, within California. Though I've lived in a geographically broad range of places within California, they've still always been in the Mediterranean climate zone, and when I lived overseas, in Australia, I managed to end up on the edge of the tiny portion of Australia that has a Mediterranean climate.

But when I change climates -- on a small scale, from Shasta County to the bay area, or on a larger scale, from the Bay Area to Massachusetts, I am thrown for a loop. The biggest blow to my sense of place is usually how the are around me feels, compared to how I expect it to feel, how the weather behaves, whether I carry an umbrella.
Posted by Mary at 3:45 PM No comments: