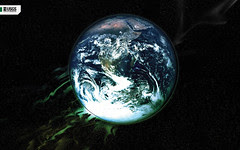 USGS Science in Action
Originally uploaded by U.S. Geological Survey.
The general public really needs a good bridge between sometimes complicated science and what we are able to assemble into a useful picture. Clear, simple, fact-rich science communication is essential, good science communicators are priceless anymore.

That's why Dan Satterfield is one of my favorite science communicators. He's direct, smart, and really gets to the point, understanding what his readers need filled in. His most recent blog post really makes that clear to me. Dan goes step by step through not only the reasons why climate change is now scientific reality (with some amazement at the TV weather people who dismiss it as myth), but he also insists its the TV meteorologist's obligation to sort it out for the watchers, for the folks at home whose only exposure to real scientists and balanced science throughout the day might be what they get from their trusty TV weatherguy.

Dan's also just plain good folks. But he's good folks with a sharp mind, and the kind of understanding of his audience (both for his blog, and on TV in Alabama) that teaches rather than preaches, that informs rather than lambasts, that gets the point across in the way we need right now.

He's the kind of science communicator that we can point at as part of the solution to the problem. When you hear people saying, "If only we could communicate science to the masses," point them to Dan's blog, and say, "You mean, like that?"
Posted by Mary at 8:03 PM No comments:

Steven Bumgardner, who produces Yosemite Nature Notes for the National Park Service, shot some video of "frazil ice" on the Merced River in the park this week, as a cold early spring storm moved across California.

I'd never heard of frazil ice before. Now, because I must look things up compulsively, I'm learning about it. Wikipedia says, "Frazil ice is a collection of loose, randomly oriented needle-shaped ice crystals in water. It resembles slush...," which probably explains why I'm imagining margaritas. And Hajo Eicken at the Geophysical Institute at the University of Alaska, Fairbanks, says

This is so cool. Spicules and blobs. Scientific terminology rocks. ("Dendritic," of course, means it's like branches of a tree, like drainage in a river delta, or the shape of a neuron.)

The waterfalls of Yosemite must be delightful just now.
Posted by Mary at 11:11 AM No comments:

The shaping of the Great Lakes, in an hour

The History Channel's new series, "How the Earth was Made," is mostly just scientific enough for me today, as I'm fighting a low fever, and wanted to stare at something educational without spraining too many neurons. Today I sat down with Hulu and watched an episode about the creation of the Great Lakes.

I knew some of it, such as the glacial history, but hadn't known about the igneous origins of the floor beneath Superior and Ontario. The series is presented in steps, giving evidence for theories (with a bit of the History Channel's typical "but that's not all" and "there's more they didn't know," and "but still, mystery remained" drama), then before each ad, recapping the bits. I appreciated those, it helped me knit the story in stages before going on to the next chapter in the story.

As it turns out, I had no idea how fast Niagara Falls was receding. Do you know? What would you guess? Watch the show and see. I was a tad stunned.

(If the Hulu.com video expires, you can find the video for sale at the History Channel website, with a few clips and full episodes still available.)
Posted by Mary at 7:04 PM No comments: