The End of the Mothball Fleet 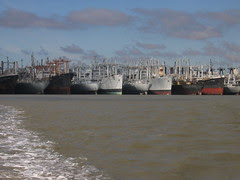 Mothball Fleet
Originally uploaded by KQED.Radio.
I grew up riding to the bay area in the family car at least twice a year. I was raised in Shasta County, up north, but Mom's best friend lives in San Leandro (about two miles from where we live now, she still lives in the same house she's lived in since the fifties) and my aunt lived in Palo Alto, so we'd come down for a couple of weeks every summer, and sometimes for Christmas or another break. Until the early seventies, we had no air conditioning, and in the summer, at least half the ride down is in temperatures over 90 or 100F, so Mom would load the car at night, toss the luggage (around the edges) and some pillows and blankets into the back of the station wagon, and toss me and my sister back there for the ride. I guess we'd leave the house around 3 or 4 in the morning, because my sister and I would wake up at sunrise, usually just in time for what Mom called "the mothball fleet." For me, that and the C&H sugar factory in Crockett were "now entering The Bay Area." Mom told us that the Navy always intended to re-use those ships, and that they were parked where they were because they had easy access to the ocean, but that the water in Suisun Bay wasn't as salty as that farther down into San Francisco Bay. I just loved them. For awhile, the Glomar Explorer was parked with them, that was exciting.

It never occurred to me until a few years ago that the ships were sitting there polluting the bay, though I knew that most of them couldn't possibly be reused now, fifty years after they were first moored. They're falling apart. To make them suitable for scrapping will mean doing things to them that will cause further water pollution. Are we just screwed?
Posted by Mary at 10:03 AM