I saw this wonderful picture of Sarychev volcano (in the Kuril Islands, erupting on June 12) yesterday or the day before, but it's been a busy few days with gardening (I got the rest of the potatoes planted, and damn these cucumber beetles that just don't squish easily) , and my "I need to blog about this wonderful photo" kept becoming, "As soon as I get a minute...." because I intended not just to share the picture, but explain what was happening. 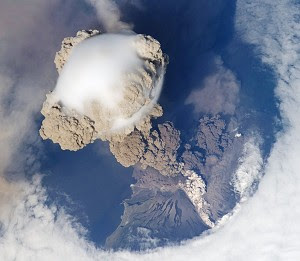 Then Andrew Alden at geography.about.com did what I'd intended to do, and explained the details, so I can quote him gratefully.

The eruption plume consists of brown ash. The white cloud cap formed in the air pushed upward by the rising plume in the cold stratosphere. It is a pileus cloud (named for an ancient Greek hat), now being penetrated by the eruption plume. The big ring of clear air around the island formed as the air around the plume moved downward in response. On the ground, three ashflows are moving down the volcano's slopes. The one on the bottom appears to be white with steam.

And here is it, caught on camera by folk in the International Space Station, for science, and for our delight.

(Yes, the title's silly. It's what my husband says every time an action movie hero narrowly escapes being blown up by ducking away from or fleeing ahead of an explosion's blast wave.)
Posted by Mary at 11:53 AM