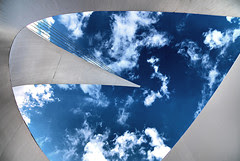 Sundial Bridge
Originally uploaded by Helioscribe.
I'm a bit of a dork, and wanted to share this today, especially:

World night/day clock. Of course, I'm posting this while the curve is as horizontally flat as it can get, but it will change over the next six months until it has two near-vertical lines.

I'm a skeptic/atheist/agnostic, really, but without theism, I'm still very emotionally and spiritually tied to how the cosmos, the solar system, and the earth all works together. I don't need to have a supernatural point of view to think solstice is really cool.

I love loving the earth, and marveling at it, and I like to hang out with people who feel the same way. I love the universe on its grandest scale, I love the interactions and lifecycles of the galaxies and stars. I love the history of the solar system and the earth, and the intricacies of meterology, and the story behind glaciation. I love the compostion of sand on a beach. I love that solstice matters to people.

It all works together. It feeds me.

How do you feed that side of yourself?

The image is a looking-up shot of the Sundial Bridge, in Redding, California. The bridge is near where I grew up, alongside the park where I spent most Independence Days, running around on the grass, finding the dunking booth, and after sunset, watching fireworks over the river. There was controversy and cost over-running and fuss about its being built, and it was possible to wreck a pretty stretch of river with that bridge, but they did good.

When I was little, I watched Redding grow from 10k to 20k people through annexations and population growth. Now, with more annexations, and more population growth, there are about a hundred thousand people in Redding. I don't like the effects of the sprawl, with oak woodland mowed down for parking lots and housing tracts, and the local lakes and rivers taking a water quality blow. (Water quality started to suffer 150 years ago, when the first mines were put on Sacramento River tributaries.) But I'm glad that if they have to grow, they're growing with some style and elegance, and a nod back to the earth.
Posted by Mary at 1:44 PM

I find the solstice and equinoxes much more powerful than the interim, human-made festivals. The other day I just went out and watched a fantastic full moon rise over the mountains. :)

I just go out and look at the stars to feel connected. Hard not to, especially here, where the nights are so fantastically dark.